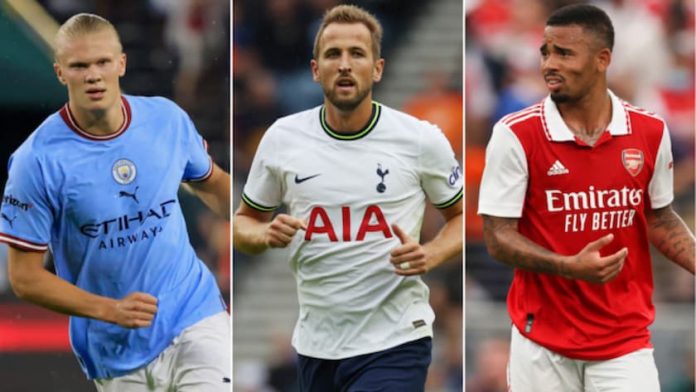 The wait is almost over with Premier League football returning in seven days. As we count down the days to next Friday let’s look at the Top 10 forwards for Fantasy Premier League this season.

Newly promoted Nottingham Forest will be looking to cement themselves back in the Premier League after their 23 year wait and Brennan Johnson will look to be their star man once again.

After an outstanding season in the Championship with 18 goals and 11 assists from 49 appearance’s, Johnson will be keen to replicate these stats in the top flight and give himself every chance to be named in Wales’ World Cup squad.

This choice may come as a surprise to FPL players considering Martials’ abysmal last season, with a lack of form and game time for United resulting in a loan move to Sevilla which consisted of being booed by home fans and poor performances.

However with the arrival of Ten Haag at Old Trafford and Cristiano Ronaldo forcing a move away from the club, the forward position is for the taking. Looking at pre-season Martial is ready to take control of the position with his 3 goals and 1 assist in three games.

Pricing at just £7m, if Martial secures that forward spot for the season he could be a steal. Martial has picked up a minor injury going into week one so it would be worth waiting till he is fully fit before including him in your squad.

Compared to his mid-priced counterparts Callum Wilson and Patrick Bamford, Watkins is able to keep injury free making him a reliable choice for FPL players.

Last season Watkins managed 11 goals and 2 assists and with Villa’s rejuvenated midfield of Buendia and Coutinho he should be provided with a multitude of chances to surpass that goal tally. With the World Cup looming in Winter he is another player wanting to cement his name in the England squad.

Michail Antonio is coming off the back of an impressive 2021/22 season in which he bagged 10 and assisted 10. This consistency enabled West Ham to endure an exciting Top 4 push which was unsuccessful but still awarded them with European Football.

However, with West Ham’s new signing of Gianluca Scamacca, a proven Serie A forward with 24 goals in the last two seasons, Antonio may have some unwanted competition. Being priced at £7.5m Antonio is still a solid pick even with the new competition up top.

Havertz alongside Timo Werner had a slow start to his time in the Premier League and wasn’t able to replicate his success in the Bundesliga.

However, with Lukaku flopping for The Blues last season, Havertz was relied upon to be a main source of goals which he succeeded in by scoring 8 and assisting 4 in the back end of last season.

Kai Havertz scored 112 points last season but with Lukaku on loan at Inter, the German will be the main forward.

Following his transfer from Manchester City, Gabriel Jesus will be looking to get off to a fast start for his new club and this has already begun with his exceptional pre-season performances scoring 4 goals, two coming against Everton and Chelsea.

Although Jesus had a successful time at Manchester City he never found consistent playing time but at Arsenal he will be leading the line week in week out. This opportunity will allow him to add to his 8 goals and 8 assists last season.

Jamie Vardy is nothing if not consistent when it comes to finding the back of the net scoring 10+ in the past seven seasons.

Following a disappointing campaign for The Foxes they will be looking to bounce back this season, and with no European football Jamie Vardy will be able to maintain focus on the Premier League. Alongside his 15 goals last season he gained 2 assists.

Cristiano Ronaldo is a proven goal scorer and this is why he’s known as the best at it in the world.

This pick may be unexpected considering the constant speculation that he wants a move away from Old Trafford to challenge for the big trophies. However as the transfer window slowly creeps towards its deadline there are less than a handful of teams that may be interested.

In CR7’s return to the Premier League he scored 18 and assisted 3 showing he’s not lost it just yet. Providing he stay’s and Ten Haag is willing to play him, Ronaldo should be a definite choice for FPL players.

Winning three Golden Boot’s Harry Kane has been trouble for Premier League defenses year after year. The England international had a slow start to the 2021/22 season after his failed move to Man City but he eventually found his form, finishing the season with 17 goals and 9 assists.

Harry Kane benefits from a brilliant partnership with Son Heung-Min which provides FPL players with a frightening partnership to use.

It is not common for a new Premier League signing to be selected by so many FPL players but Erling Haaland is an exception with 57.8% of players picking him.

However, it doesn’t come as a surprise with the Norwegians 22 goals and 8 assists in the Bundesliga last season whilst boasting a 0.8XG meaning he’s expected to almost score a goal a game.

Moving to a stacked Man City squad including Kevin De Bruyne one of our Top 10 FPL midfield picks, it won’t take long for Haaland to find his footing in the North West and will be likely to replicate his outrageous Dortmund stats, especially with the help of versatile full-back Cancelo.