The Austrian had written the post to end speculation regarding his future. A bid of £35m had been received with the forward reportedly interested in making the move.

Fans have given a mixed reaction with some fans relieved it’s over. Arnautovic is a big favourite in east London, so it’s not surprised that fans have been keen for the 29-year-old to stay at the club.

Others have reacted to his statement with a negative response. A feeling that he’s taken the club for a ride and shown no loyalty.

Fans have also referenced his desire to perform to the best of his ability in helping the club this season. A sign to some that he intends to leave in the summer.

A selection of tweets… 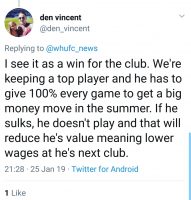 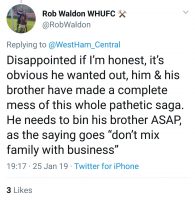 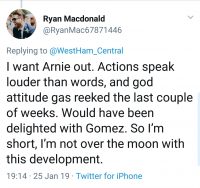 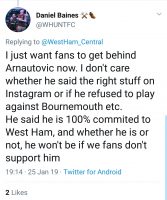 It will interesting to see how Irons fans react tomorrow night when West Ham travel across London to face Wimbledon in FA Cup fourth-round action. It’s doubtful he will receive a poor response, but to win over those showing displeasure, Arnautovic could do his case the power of good, by firing The Hammers into the fifth-round.

His next outing at the London Stadium is not until 4th February, when West Ham entertain league leaders Liverpool.