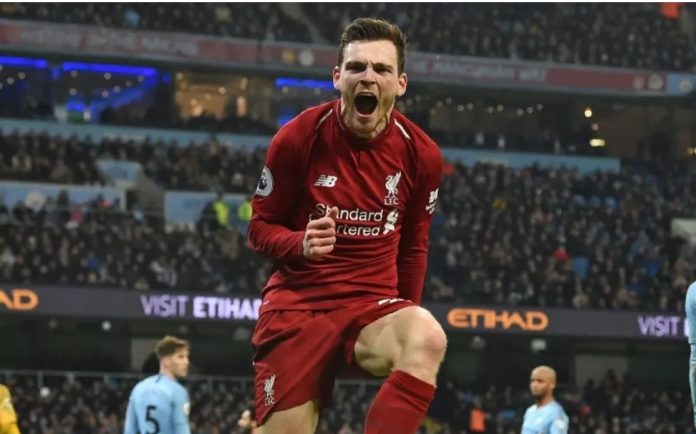 Liverpool left-back Andy Robertson has signed a new deal that keeps him at Anfield long-term.

The Scotsman arrived on Merseyside during the summer of 2017 for a fee of around £8m from Hull City.

During his time at the club, the former Dundee United man has appeared on 56-occasions for the Merseyside club.

Robertson spoke of the satisfaction of committing to his future with the lesgue leaders. Stating it was an easy decision to make.

“As soon as the club came to me, it was a no-brainer for me – I want to stay here, so as soon as they put an offer on the table it was signed as quickly as that”.

The 24-year-old is very happy with life at Liverpool. He explained why:

“Getting to know the lads and working with all the staff at Melwood has been a pleasure. The best thing about work is when you love coming in every day – and that’s what I do here. I am glad I have extended my stay and hopefully we have a lot of good days ahead”.

Robertson is a huge fans favourite at Anfield, and it’s not surprising with the commitment he has to give the fans what they crave the most. He added:

“I hope to achieve success as a team over the course of this new deal,” he added. “This club demands trophies and too long has probably passed without trophies”.

Reds fans are extremely satisfied the club have tied down the Scotland captain to a new deal. Many took to Twitter to show their joy and appreciation of the Glasgow-born defender. 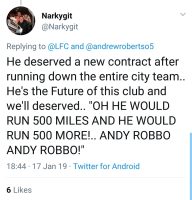 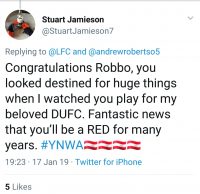 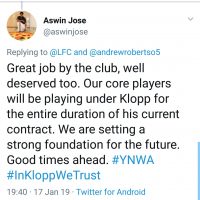 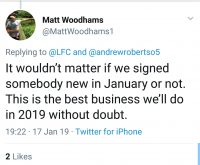 Robertson was also keen to heap praise on Jurgen Klopp. The German has helped shape the Scotland international’s career.

“Yes, huge. I think he helps with the development of all the players. People come in as probably a lot more the finished article than what I did when I came in, but he still helps them in every single way. For me, he’s been different class since the moment I walked in”