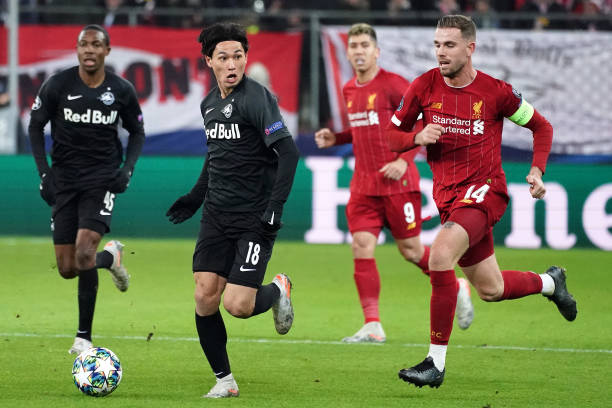 Red Bull Salzburg star Takumi Minamino is set to join Liverpool in a deal worth £7.25 million in January, and transfer expert Fabrizio Romano has taken to Instagram to deliver the latest update on the deal.

Minamino-Liverpool, here we go! 🔴 Takumi Minamino will join Liverpool on next January. Total agreement reached also with his agents on a five years contract. Just medicals to be completed and then paperworks will be signed. He feels “proud” to join Liverpool and Jurgen Klopp insisted to sign the Japanese immediatly. Release clause (£7,25M) will be paid to Salzburg.

The youngster caught the eyes of Liverpool during their Champions League group stage games with Salzburg, and they just weren’t in the mood to wait till summer before sealing a deal.

The 24-year-old Japanese attacking midfielder was on the scoresheet during his side’s 4-3 loss at Anfield, and has been part of RB Salzburg’s attacking trio that includes Hwang-Hee Chan and Erling Braut Haaland.

Minamino joined Salzburg from Japanese side Cerezo Osaka for less than £1 million in 2015, and has seen his stock rise to times seven of that amount.

The Japan international has nine goals across all competitions this term, and has already bagged 11 goals in 22 games for his country.

Liverpool could do with more quality depth going forward as they look to challenge across four competitions, and the talented Asian brings that and versatility to the table.

While he is primarily a winger, Minamino can also play in a number 10 role, and it was in that position he switched to when inspiring Salzburg’s 3-3 comeback in the first-leg, before Mohamed Salah broke their hearts with a late winner.