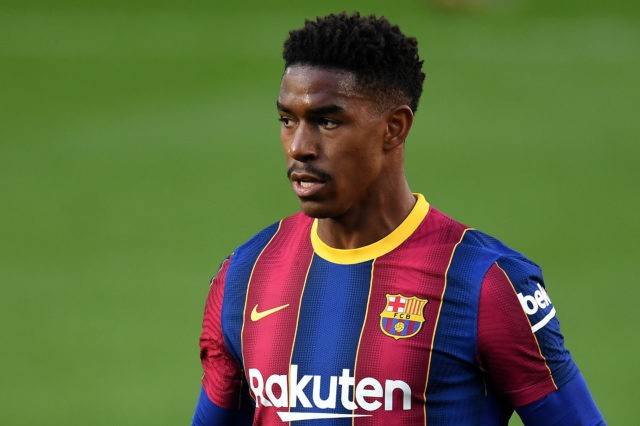 Popular journalist and transfer expert, Fabrizio Romano, has claimed that Barcelona left-back Junior Firpo is expected to stay at the Spanish club this month.

Firpo has been linked with a move away from the Catalan club, with Premier League outfit West Ham United keen to secure his signature.

According to a recent report from ESPN, the Hammers have earmarked the Barcelona left-back as manager David Moyes looking to bolster his defence this month.

It was claimed that the 24-year-old is keen to leave the club after struggling for regular games this season.

Serie A giants AC Milan have shown a keen interest in securing his services and have made a loan approach. Romano has claimed that there’s ‘nothing advanced between’ the two clubs at the moment and the Spanish left-back is now expected to stay at the club.

There’s nothing advanced between AC Milan and Barcelona for Junior Firpo. The Spanish left back is now expected to stay at Barça. 🔴 @DiMarzio #transfers #FCB #ACMilan

It was reported that the Hammers could be willing to sign him permanently, but they might have to pay around £18 million for his signature.

Arthur Masuaku is currently out injured, and it leaves the Hammers with Aaron Cresswell as the only available option in left-back areas.

Firpo is a versatile defender who played 21 times across the La Liga and Champions League for the Camp Nou outfit last term.

However, the Hammers are desperate to sign a striker this month following the departure of Sebastien Haller and are putting all efforts in that direction.

West Ham must look to capitalise on Barcelona’s financial problems and try their luck by making a loan offer for the defender this month.