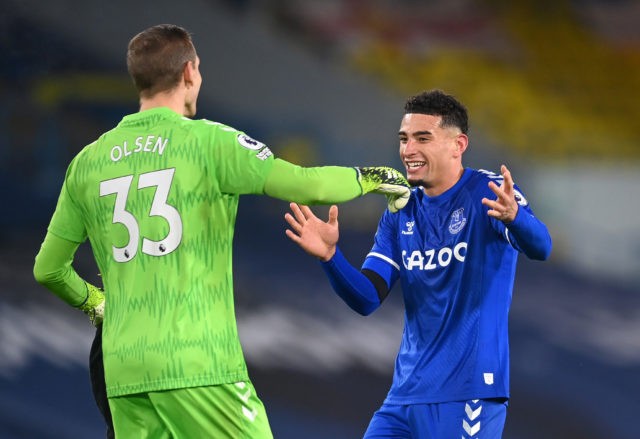 Everton will take on Manchester City in the FA Cup sixth-round at Goodison Park on Saturday.

Ahead of the match, Carlo Ancelotti has given the latest team news update, and Everton fans won’t be too happy about it.

Jordan Pickford is injured, and he is out of tomorrow’s game. He also hasn’t been picked for the England national team squad.

Second-choice goalkeeper Robin Olsen is also out injured for this game. In his absence, Joao Virginia, 21, is expected to start.

Olsen out of tomorrow's game.

Gbamin will train with the team next week. James too

Everton fans will be relieved to see that Jean-Philippe Gbamin has finally returned to training after a long injury lay-off, but he won’t feature against City.

The 25-year-old defensive midfielder is expected to train with the first team next week.

James Rodriguez, who has just started in three out of Everton’s last 10 games, is also injured at the moment, and he won’t feature in the FA Cup clash tomorrow.

However, the Colombian is set to return to training next week. Ancelotti has confirmed that he will play against Crystal Palace when the Premier League restarts.

Ancelotti on Rodriguez: "He will be available for the game with Crystal Palace."

Abdoulaye Doucoure and Fabian Delph are also out for tomorrow’s clash.

On Doucoure: "He's recovering, he's doing only treatment. He's still in a boot and cannot touch the floor. At the moment, we cannot say when he will be back."

Ancelotti has confirmed that Yerry Mina is in good shape and that he has recovered completely. The 26-year-old defender is available to face City.

Everton have struggled badly at home this season, and they will have to be on top of their game to knock Pep Guardiola’s side out of the competition.

It will be a tough ask, and Mark Lawrenson has predicted a 2-0 win for the visitors.