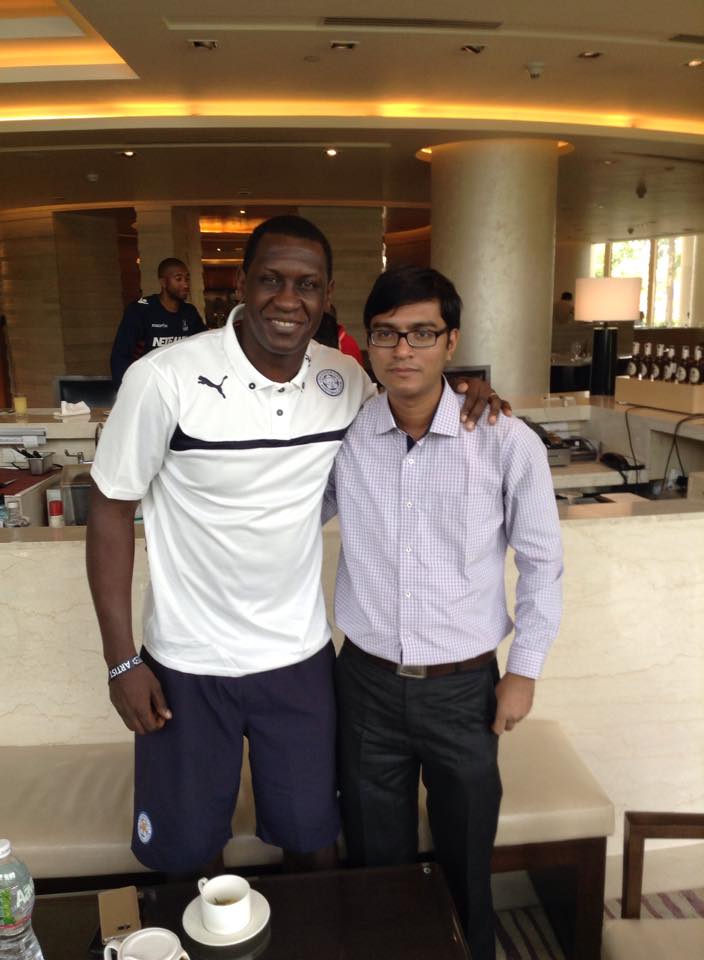 In an Exclusive interview at the Hotel Trident in Mumbai, Soccerlens Deputy Editor Saikat Mandal caught up with former Liverpool striker Emile Heskey. The 36-year-old Leicester City ambassador has been an honourable invitee in the Barclays Premier League Live Event, held in Mumbai.

The England international, who scored 60 goals for Liverpool and forged a strong strike partnership with Michael Owen, took time off his busy schedule to speak with us. Ahead of titanic clash with Manchester United at Old Trafford on Sunday, Heskey said this is a must-win-game for Liverpool, if they are serious about getting into top four this season.

“It’s a vital game. If you even want to make a statement and show the fans that you are back, determined to get back the fourth spot, this Sunday is the time to show that. Old Trafford, there are no bigger stage really, is it? It is the best place to put things right to really make a statement.”

The former Aston Villa striker also felt that Liverpool’s Champions League exit is a bit of shock but that would hardly leave any effect on their Premier League performances, rather it should guide as an extra incentive to try and get back into top four.

“Champions League shock exit shouldn’t affect Liverpool, that should be more of an incentive to actually go and try get the top four spot because you want Champions League football. You feel you deserve it. “

It is indeed a shock exit to be honest. If you look at the group how it was drawn, you look at Liverpool and Real Madrid to go through; you were not looking to get them out, but I do feel, it should give them more determination to actually do well in the league.”

There are all sorts of reports in the media recently about Brendan Rodgers’ future, with several media outlets claiming Liverpool have already started seeking for alternatives. The former striker however believes that Rodgers is still the right man for the Liverpool job and that he is going down the right path.

“I don’t know if his jobs is in doubt, actually, look, whenever you’re on a high everybody will want to offer you a contract and when you’re doing bad then they say your jobs in doubt.”

He is going down the right path, as in,  i think Liverpool are playing better football and the philosophy & I believe in what he is actually trying to put in place.”

The former Red was full of praise for young Raheem Sterling and says he has the potential to be one of the best in the world. Rodgers claimed that Sterling at this moment is the best young player at his age, and Heskey echoing on the same lines, added the 20-year-old is a “phenomenal talent.”

“He is definitely a potential world class talent. I don’t know he is the best young player in the world right now, but he has definitely got great potential. he has got great ability, great balance, he just need a bit of confidence.”

When asked to analyse what has gone wrong at Anfield this season, Heskey feels it’s lack of goals upfront that is hurting the Reds badly. He feels Rodgers hasn’t done enough to bolster his defence, and that, Liverpool lack a leader at the back.

Furthermore, he opines that, a striker and a defender/ goal keeper in the January transfer window should be Liverpool’s main priority.

When you say it’s the same team, you’re missing two fundamental people that scored 52 goals last season, & well they conceded 50 goals, that says a lot, and i think those 52 goals peppered over the defensive holes. He hasn’t really addressed the defensive holes and that is coming back to haunt him a little bit, which is why he is finding difficult, then obviously, the January transfer window is coming in and then is probably thinking how does he pepper over, how does he correct that defensive holes.

When Carra was there it seemed like a one unit. They do not have a player like that now & he is possibly be looking for that player now. Personally, I think they should buy a striker, just because, it gives them more competition, keeps everyone on their toes and keeps everyone hungry.