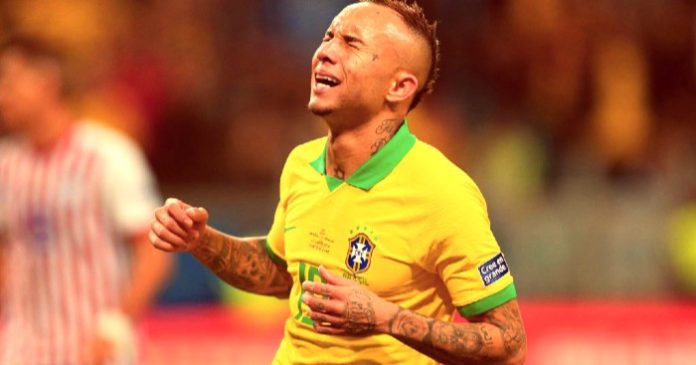 Everton have been boosted to secure their first signing in January after the Everton Soares transfer saga has taken a positive spin in favour of the Toffees.

The Toffees have been following the Brazilian forward closely for a long time, with ESPN reporting earlier this month that Carlo Ancelotti had spoken to the player himself.

Now the Daily Star are reporting (h/t Zero Hora) that Everton are close to sealing the signing of Soares.

The report claims that the agent of the Gremio attacker, Gilmar Veloz, is set to fly to Liverpool to hold talks with Everton, and that the deal is “very close” to being completed.

Everton have been in touch with the Brazilian club over a move for the forward with Carlo Ancelotti eyeing a £30 million deal.

Newcastle United were also linked with a move for Soares who has scored 13 goals this season already.

However, Everton look more likely to secure his signature.

The 23-year-old would be a superb signing for Everton if they can pull off the deal.

He has been one of the consistent performers for Gremio in the Brazilian top flight in recent years, and had caught the attention of Manchester City and Arsenal in the past.

Soares impressed during the Copa America this summer, and finished the tournament as joint top scorer with three goals.

It seems he is looking to test himself at a competitive league and Everton are looking to provide him with that platform.

The Brazilian club are looking for around £25million for the attacker, and it should not be a problem for Everton to thrash a deal for him.

Dominic Calvert-Lewin has impressed under Ancelotti, but Everton still need depth in that area.

Moise Kean has struggled to settle in, and Ancelotti cannot afford to take further risks in the second half of the season.