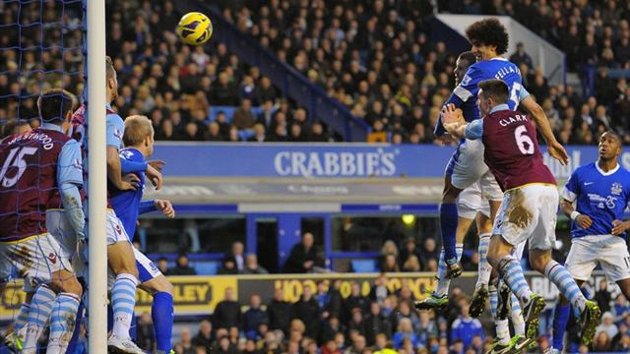 Another frenzied Saturday at the Premier League was marked yesterday by a topsy-turvy encounter at Goodison Park where Everton came back from a two goal deficit to recover one point in dying moments of the game against Aston Villa.

This fight to the finish games have become a norm for the Toffees at home this season and one wonders how they manage to do it and maintain a decent position (currently 5th but likely to be 6th if Spurs play out the game in hand with points) in the league table.

For the number crunchers, Everton have a win/draw percentage of above 90% at home, and 83% away from home, with only two defeats out of 12. It is the unerring fighting spirit that has made the tight-knit squad avoid defeats against quality oppositions in the league. Along with Manchester clubs and Stoke City, they remain the only team in the league to have lost just one single game at home.

It must be said this is a squad where the sum is greater than its parts, unlike teams assembled at greater budgets (like QPR or West Ham). What also helps is the fact that the squad has played as a unit for long, and thus there’s clarity among the players regarding the attacking and defending positions which adds a balance in the side, taking the team forward.

Moyes was frustrated with the lack of transfer activities for his side in the January transfer window but like always, he didn’t complain and fret about it. However, he did express the concern that his side could well get exposed as the season progresses. This is probably the best opportunity Everton will get to finish in top four and if anytime an investment was needed in the squad, it was now.

Individual bravura has also been an important feature for Everton this season. Marouane Fellaini has been sensational throughout the campaign (10 goals and three assists) and at the need of the hour on Saturday, it was the Belgium international who rescued the team yet again.

Also, worth mentioning is the form of Victor Anichebe, who has now scored five goals in eight appearances for the club. Nikica Jelavic, despite scoring six league goals so far had been off colour in recent matches and thankfully Anichebe has stepped up to the plate nicely in his place.

What they presently lack is the ability to hold on to leads, and the lack of quality at the back is a prime reason behind that. One can only wonder to what heights David Moyes could have led the team to had the sheer number of drawn games (13 out of 26 in total) tilted to his favour.

Lack of proper investment in the squad is certainly not under the control of Moyes but the Scotsman should find a way to earn full points when the situation is going against his team. They have found a way to fight back from tough situations and now should also find a way to turn those draws into victories.