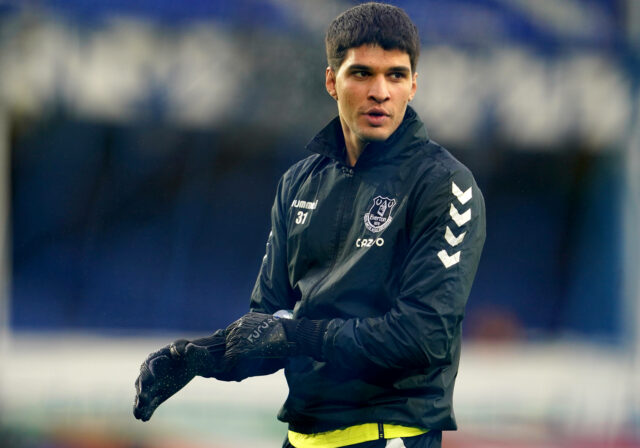 Everton were beaten by ‘best in the world’ Manchester City in the FA Cup quarter-finals on Saturday.

The Toffees lost 2-0 against Pep Guardiola’s side at Goodison Park.

Late goals from Ilkay Gundogan and Kevin de Bruyne broke Everton’s resistance and kept their hopes for the quadruple alive.

Everton created very few chances but were solid defensively. City found it hard to break Everton’s well-marshalled backline, but the introduction of Riyad Mahrez and De Bruyne made a huge difference.

Gudogan headed in with six minutes remaining after Aymeric Laporte’s shot was tipped onto the bar before De Bruyne added a second in the 90th minute.

The likes of Ben Godfrey, Andre Gomes, Dominic Calvert-Lewin and Yerry Mina played really well, but one player who impressed on the night was Joao Virginia.

The 21-year-old, who made only his second senior start with Jordan Pickford and Robin Olsen missing through injury, produced some spectacular saves during the match.

Many Everton fans took to Twitter to express their reaction to Virginia’s display after the game. Here are some of the selected tweets:

Joao Virginia has been absolutely outstanding tonight by the way. #EFC #COYB

It was a decent effort from Everton, but Manchester City’s dominance and pure quality came out on top in the end. I’m not going to moan, as shit as it was. Ben Godfrey was absolutely quality, but the main man was Joao Virginia. What a performance from him! #EVEMCI #EmiratesFACup

Joao Virginia is the 🐐

That Joao Virginia save on the Sterling effort was WC today. Good showing for the kid against TOP opposition.

Reset and move forward. Up the Toffees

With this defeat, Everton’s cup run is over, and they must focus on finishing the league strongly. While a top-four finish looks difficult at the moment, Everton must aim to secure a European position at least.

In other news, Everton are interested in signing Napoli goalkeeper Alex Meret.