Everton picked up a 4-2 win over Lincoln in the League Cup last night.

Summer signing Alex Iwobi scored his first goal for the Toffees yesterday but his gesture after the game impressed the fans the most.

The former Arsenal winger went over to the Everton fans after his post-match interview and applauded the fans after pointing at the club’s crest on his shirt.

Iwobi’s gesture towards the fans and the respect towards the badge will certainly endear him to the fans. 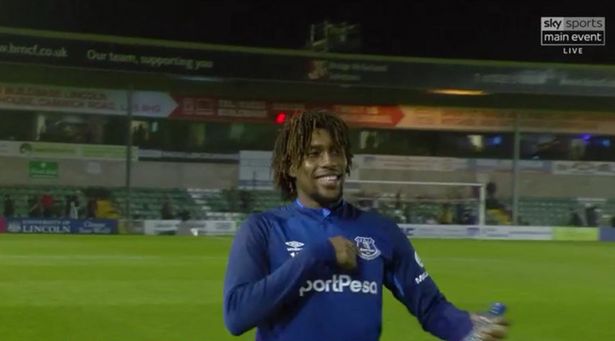 The Toffees will be hoping for many more goalscoring performances from the winger this season.

There is no doubt that Iwobi is a top talent and he could develop into one of the league’s best wingers with the right guidance.

Marco Silva could be the man to unlock his tremendous potential.

The youngster is already a very good dribbler and once he improves his end product, he could be a star for Everton.

Here is how some of the Everton fans reacted to the gesture from Iwobi after the game last night.

Iwobi slapping the badge at the end there, all the time in the world for that

Iwobi pointing to the badge on his way off the pitch, felt that! 😭🙌🏼💙 good to get that win @Everton @alexiwobi

Iwobi pointing to the badge you love to see it💜

Iwobi pointing to the badge. YA LOVE TO SEE IT