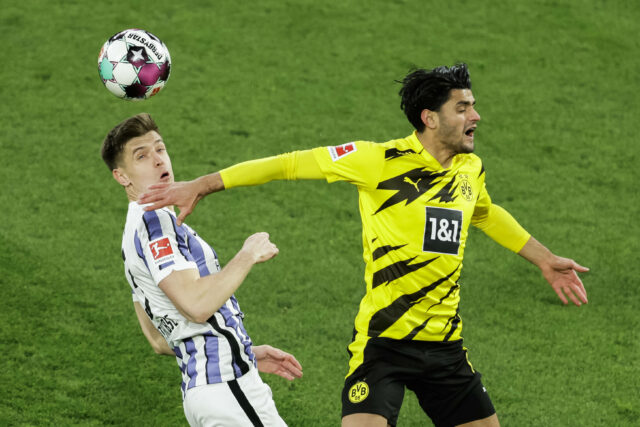 The report claims that Chelsea and Manchester City are tracking his situation closely, while Everton and Tottenham Hotspur have also registered an interested.

He has a contract at the club until 2022, and several clubs are vying for his signature after his impressive performances this season.

Dahoud initially struggled for game time at Dortmund under interim head coach Edin Terzic. However, he has enjoyed a recent resurgence and has caught the attention of several heavyweight Premier League clubs.

He was brilliant in Dortmund’s Champions League last-16 win over Sevilla, and his improved form has seen him earn two Germany caps this season.

Everton boss Carlo Ancelotti stated recently that he would sign a combative central midfielder in the summer transfer window.

The Toffees have been frequently linked with a move for Juventus midfielder Adrien Rabiot, but Dahoud would be a fantastic addition to the squad.

Spurs are also looking to bolster their midfield this summer. Moussa Sissoko will turn 32 in August, and Spurs need to sign a quality replacement for him.

Doubts also remain about whether Harry Winks will stay at the club beyond this season. Dahoud would be a brilliant signing for them if they can get him at a cut-price deal.

In other news, check our predicted Tottenham starting line-up vs Dinamo Zagreb.