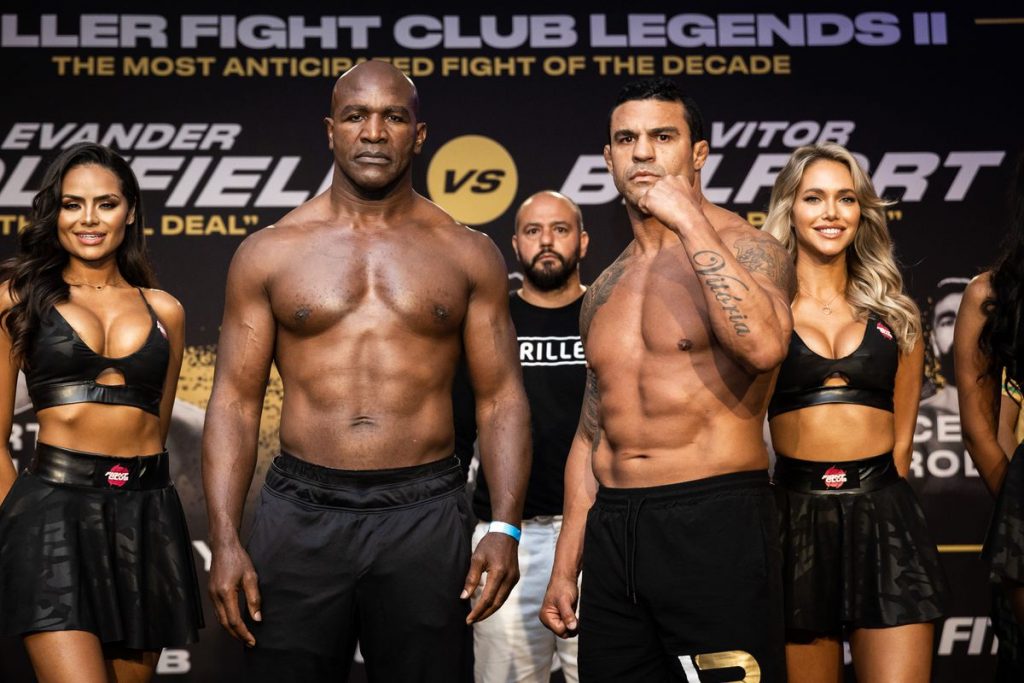 Evander Holyfield is out of retirement aged 58 and set to fight MMA fighter Vitor Belfort in Florida on Saturday. Get a full preview of the fight, including live streaming information and our exclusive betting tips.

Evander Holyfield is one of the world’s most famous boxers, having held every title imaginable during a 44-10-2 career that included a stint as undisputed cruiserweight world champion before a move up to heavyweight where he fought an infamous series of fights with Mike Tyson.

‘The Real Deal’ beat Iron Mike in November 1996 but then, in the rematch, suffered one of the most widely recognised injuries in sporting history, when Tyson controversially bit a chunk out of Holyfield’s ear.

Holyfield continued as a fighter but was effectively retired by Lennox Lewis and finally hung up his gloves after some final money spinning fights in 2011. However, aged 58, Holyfield is back and has been granted a license to fight UFC legend Vitor Belfort.

The fight is controversial but that is the selling point and it’s going to be hugely interesting to see if Holyfield has anything left, or if Belfort is going to make a mockery of the ‘old man’ when they meet in Florida on Saturday night.

Belfort, a former UFC fighter, had a record of 26-14 in the octogan and famously knocked out Michael Bisping, Luke Rockhold and Dan Henderson before losing a title fight to Chris Weidman in 2013.

He has one sanctioned boxing fight, where he knocked out fellow Brazilian Josemario Neves in just 61 seconds in 2006.

Holyfield vs Belfort is available to watch on the Triller Pay Per View service. The fight costs $49.99 as a PPV and is also available as an online stream. The Main Card begins at 7pm EST.

The prelims will kick off at 6 p.m. ET. That part of the card is as follows:

Odds courtesy of BetOnline, who are giving all new players a $1000 welcome bonus when they register an account using the promo code INSIDERS.

Evander Holyfield is 58-years-old and hasn’t boxed professionally for 10 years. He’s not boxed at a proper level for even longer and it’s debatable how fit the former fighter has kept himself for this contest.

The Real Deal has had plenty of issues outside the ring since retirement and him coming back seems like a fight designed to line his pockets and little else. However, it’s going to be a fascinating watch and as a betting contest it gives us a great opportunity.

Vitor Belfort is not cannon fodder and he’ll be able to use the fight to boost his reputation, but only if he wins. The 44-year-old (a full 14 years Holyfield’s junior) has boxed in the past before his UFC days and he’ll know his way about the ring, unlike some of the recent exhibition fights which we have seen on PPV.

A solid style and a reputation to upload makes Belfort the worth favorite but BetOnline are being generous with -240 odds. This seeems a total mismatch and it’s almost certain that the referee will step in at some point to save Holyfield.

It’s +110 that Belfort wins the fight by KO/TKO and, on a day with a full slate of football games, that still looks like one of the best bets.