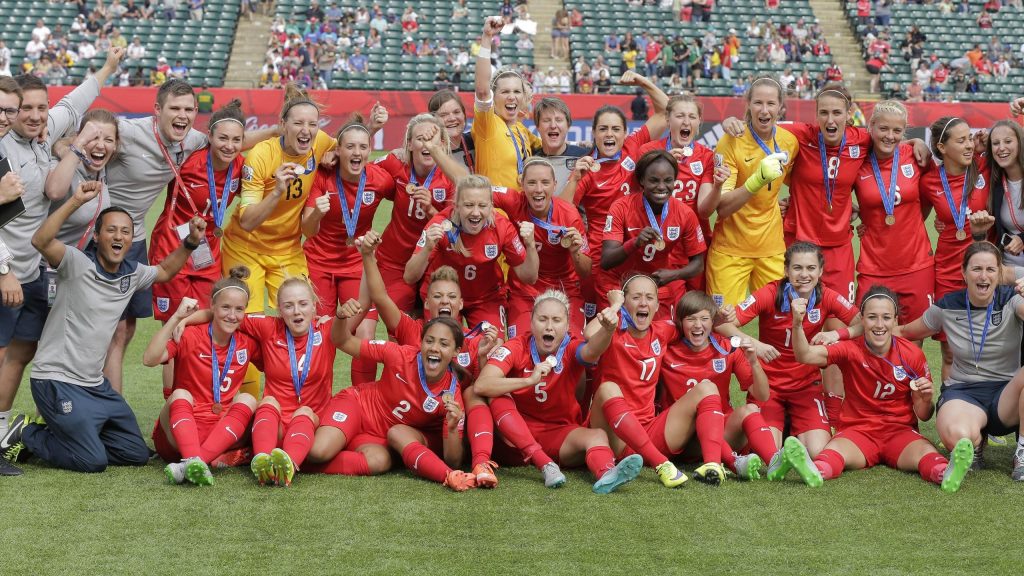 Before Saturday’s third-place play-off win, in twenty previous attempts England’s ladies had never beaten their German counterparts. The last time they met, in a friendly at Wembley in November 2014, Germany cantered to a comfortable 3-0 victory. The time before that, the 2009 European Championship final, they trounced England 6-2.

There was nevertheless a quiet confidence in the England camp ahead of Saturday’s match in the Commonwealth Stadium in Edmonton, though from the start it was clear England feared the technical superiority of the Germans and chose not to go toe-to-toe. Instead, England set-up to defend in numbers. They were solidly organised and seemed to relish the physical battle in particular.

The result was a performance of grit more than guile, epitomised above all in the tireless work-rate of central midfielder Jill Scott.

A rangy former distance runner, Scott covered every blade of grass on the Edmonton pitch. Her performance, like England’s, was a marathon rather than a sprint. The game was far from a thriller, though what was lacking in quality and excitement was more than made up for in desire and commitment.

Centre half Laura Bassett also put in a determined display. Rugged in the tackle, Bassett at times played like a woman possessed, repeatedly putting her body on the line in an attempt to atone for the heartbreak of her late own goal in the semi-final against Japan, which denied England a chance to compete for the top prize.

Winger Karen Carney was a constant outlet, too, while full-back Lucy Bronze—perhaps the revelation of the tournament insofar as English women’s football is concerned—had another assured display. Keeper Karen Bardsley also made several important stops. However, in truth this was not an afternoon of stand out individual performances, but of collective discipline and spirit, from a team that knew this was as good a chance as any to get an historic first win over Germany.

For their part the Germans looked jaded. They rested several key players and displayed a lack of intensity which suggested they did not think there was anything much to play for. They had come to win the tournament, not finish third. Winger Sara Däbritz was perhaps their star performer. However Germany lacked a cutting edge in the final third and England were able to soak up waves of German pressure with little trouble.

Gradually, as the game wore on, England became more adventurous. The introduction of Eniola Aluko on the hour mark arguably transformed the match. Her pace up front stretched the pitch and constantly threatened in behind the German back four. Forward Lianne Sanderson, who came on with ten minutes of regulation time left, complimented Aluko perfectly.

The two linked well and probed away as England finished the second half on the front foot, taking the game to a Germany side who nevertheless looked like they had the potential to hurt England on the break.

As the first half of extra time drew to a close, former England international turned commentator Sue Smith observed that the longer it went on, the more likely it was that the match would be decided by a mistake. So it proved.

A reckless challenge by the German left back Tabea Kemme, who with little apparent danger grabbed hold of Sanderson as she tried to turn on the edge the box, conceded a penalty. As she has a habit of doing, Farah Williams converted the spot kick to perfection, keeping her cool and calmly slotting low to the German keeper Nadine Angerer’s right despite substitute Alexandra Popp’s best efforts to distract her.

With less than five minutes of extra time to go, Germany’s Bianca Schmidt then missed a golden chance to equalise, the ball coming off her shoulder with the goal gaping. She’ll have nightmares about that one for years. That was the best attempt Germany could muster, however, and England withstood the pressure to record a famous first win against their bitter rivals, in what was their twenty-first attempt.

The celebrations of the England ladies following the final whistle left you in no doubt about how much this meant to them. The solemn faces of their German counterparts—something unaccustomed indeed—was perhaps greater reward than any medal.

England manager Mark Sampson heaped praise on his team in a post-match interview. It was his careful tactical planning, masterfully and tirelessly executed by his Lionesses, which had won the day. As a result, England can leave Canada with their heads held high—and for the first time with a German feather in their cap to boot.