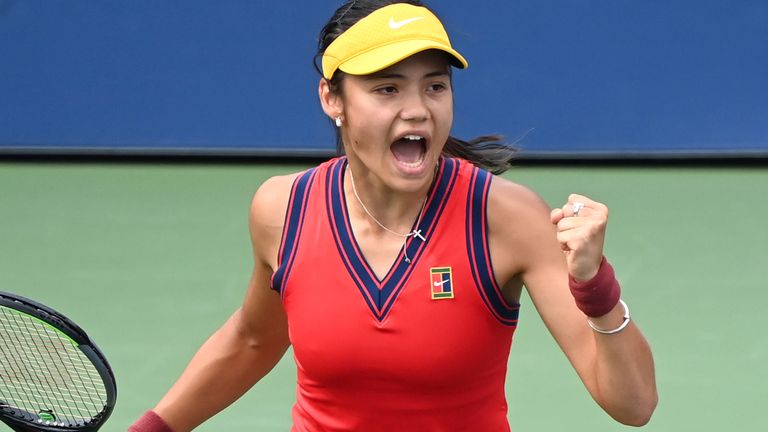 Britain’s Emma Raducanu is playing in only her second ever Grand Slam event and has made the final, where she faces fellow teenager Leylah Fernandez on Saturday. The match is

The 2021 US Open Final is live at 21:00 BST on Saturday September 11. To watch and bet on Raducanu live online, simply open an account at Unibet online.

To watch the final of the 2021 US Open, simply open a Unibet account, make a small deposit. Then, go to the IN-PLAY section and select the game you want to view. All US Open live streams will be available as long as you have a funded account.

SportsLens readers qualify for a £40 Risk-Free Bet when signing up to watch the US Open at Unibet. No matter the deposit size, if the first bet placed with Unibet loses, the firm will refund the stake up to a maximum of £40. All readers also get £10 in Casino Credit upon sign-up.

Emma Raducanu continued to shock the tennis world with her stunning performances as she thrashed Maria Sakkari 6-1, 6-4 on Friday to storm into the US Open final. The Greek, who had knocked out Bianca Andreescu and Karolina Pliskova en route to the semi-final, was expected to provide stiff competition to the British teenager. But the 26-year-old didn’t fare any better than all the other players who were dominated and destroyed by Raducanu so far in the tournament.

The British teenage sensation had faced some criticism after she retired from her Wimbledon match against Ajla Tomljanovic due to breathing difficulty earlier this summer. However, she has now responded to that by producing a series of scintillating performances in what is only her second ever Grand Slam event.

The 18-year-old has yet to drop a set in the tournament, despite facing Stefanie Voegele, Zhang Shuai, Sara Sorribes Tormo, Shelby Rogers and Belinda Bencic. She has already become the first qualifier in the Open Era to make it to the final of a Grand Slam, and now the youngster will be fancying her chances for victory at the Flushing Meadows.

Leylah Fernandez, meanwhile, hasn’t been as dominating as her adversary on Sunday, but she has also been defying expectations with her spectacular displays in the tournament so far. And it should also be kept in mind the Canadian has had to deal with tougher opponents than Raducanu.

After victories over Ana Konjuh and Kaia Kanepi in straight sets, Fernandez came up against defending champion Naomi Osaka who went out of the competition after three gruelling sets. The Canadian’s next opponent was 2016 winner Angelique Kerber who battled hard but was ultimately overcome 4-6, 7-6, 6-2.

In the semi-final on Friday, Fernandez lost a set but eventually prevailed 7-6, 4-6, 6-4 over second seed Aryna Sabalenka to make it to the final of a Grand Slam for the first time.

Emma Raducanu and Leylah Fernandez are immensely talented tennis players who have defeated some of the biggest stars to make it this far in the tournament. But who will triumph on Sunday? Raducanu likes to attack and impose herself from the baseline, but her superb shot tolerance goes well with her boldness in attack. While her Canadian opponent boasts spectacular defensive skills and is known for her terrific counter-attacking ability.

If we have to pick one from the two, it will be Raducanu due to her complete dominance in all the matches she has played so far in New York. The British sensation is the 4/6 favourite to win Saturday’s US Open final and all losing stakes are refunded for those who join Unibet.

Bet on Emma Raducanu to win the US Open at Unibet

To watch Raducanu vs Fernandez live, uninterrupted, and in full, just sign up and make a small deposit into your Unibet account before 9pm BST. Then, kick back and enjoy the top action from the US Open women’s semi-final.