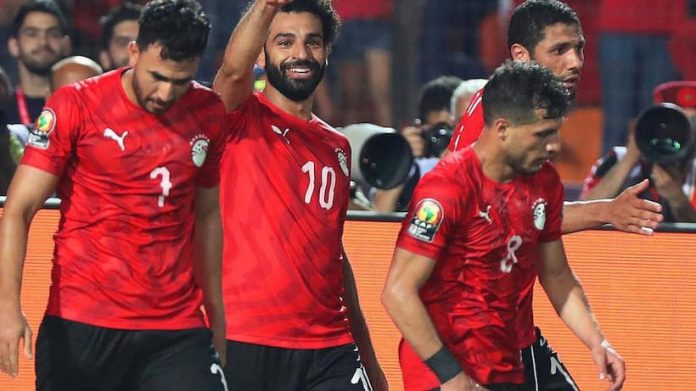 Egypt have reached the knockouts of AFCON 2021 after they eased past Sudan in their Group D final match.

Mohamed Abdelmonem scored a goal in the first-half of the game and that proved sufficient to deliver them victory at the Ahmadou Ahidjo Stadium.

The defender put his side ahead in the 35th minute by heading home Abdallah El Said’s corner.

The Falcons of Jediane didn’t offer a lot of resistance and looked more likely to concede than score goals.

The Pharaohs dominated proceedings from the beginning and Mostafa Mohamed’s brilliant effort was stopped by Sudan’s goalkeeper Mustafa.

After Abdelmonem’s opener, they continued to boss proceedings and threatened to score several times.

Liverpool star Mohamed Salah went close in the second half but he was denied by the substitute goalkeeper Abu Eshrein.

While Amr el Solia also got a good scoring opportunity but only managed to blaze his effort over the bar.

Carlos Queiroz’s side will now face the winners of Group E in their round of 16 match.

Egypt have the distinction of being the most successful team in the Africa Cup of Nations, having won a record seven titles.

Their most recent title came in 2010 when they defeated Ghana in the final.

The Pharaohs have now made it to the knockouts in five of their previous six AFCON appearances.