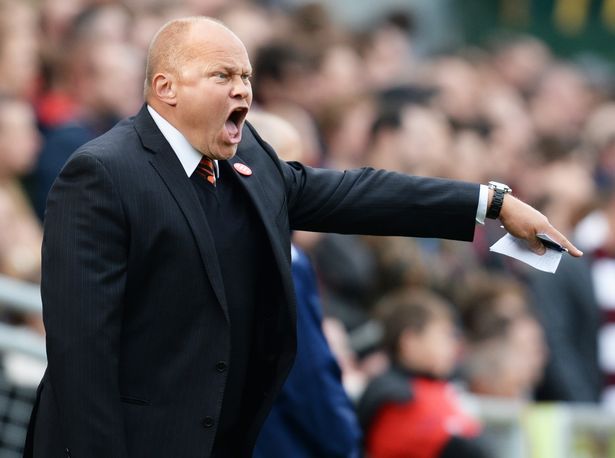 Friday’s 1-4 at home to Celtic condemned Dundee United to their 16th defeat of the season. This would’ve been a poor tally at the end of the season if you had asked the Tannadice faithful about their pre-season ambitions, but scarcely anyone would’ve expected that many defeats after having played only 22 games. Friday’s loss was further punished by Kilmarnock’s 2-1 victory over Inverness on Saturday, extending Killie’s lead over United to 14 points.

The situation at Tannadice is a bleak one. Chairman Stephen Thompson has already warned of the stark financial consequences of relegation to the Championship. Such is the extent of the problem however, many commentators have already consigned the Arabs to relegation. No team in the Scottish top flight has been bottom at this stage of the season and survived in the last 10 years – and all of them faced smaller deficits than United need to claw back.

Dundee United’s plight, at first glance, may come as a shock to most observers. The Tannadice club have only finished outside of the top four once in the last six seasons. After developing a string of fine players, the club seemed to have reached a level of consistency in terms of strong league positions.

It is the retention, or rather lack of retention, of these players which has undoubtedly defined their sharp decline. David Goodwillie, Scott Allan, Johnny Russell, Ryan Gauld, Andrew Robertson, Gary Mackay-Steven, Stuart Armstrong and Nadir Ciftci have all been sold on by United since 2012. These players are only some of the notable influences to have departed but there is no doubt that the club’s inability to find good enough replacements has truncated the progress they were making both on and off the field in recent years. Blair Spittal is the latest young United player to stand out in Tangerine and is currently being linked with a move to Birmingham City.

The problem for the club is that it is left with no option but to sell players when it’s financial position is uncertain.

At further inspection though, the landscape of Scottish football has been laced with sudden changes to the stature of some of the country’s biggest clubs. Rangers and Hearts financial trouble led to their respective dramatic demises, while Hibernian have also been relegated and are now spending a second season in the second tier. Motherwell, who finished 2nd in 2012/13 and 3rd in both 2011/12 and 2013/14, only survived relegation to the Championship with an all-or-nothing play-off win against Rangers. Change happens very quickly in football, and Scottish football has become the prime example of this in recent seasons.

Dundee United also maintain the 3rd highest wage bill in the top flight – behind only Celtic and Aberdeen. This further highlights the inexplicable extent of their bad form and highlights the financial problems Stephen Thompson has already warned of. They need only look at their close neighbours Dundee to understand how difficult it can be to bounce back from relegation. Relegated in 2003, Dundee entered administration in November 2010. After a tumultuous nine years, the Dens Park side only returned to the top division in 2012.

The replacement of Jackie McNamara with Mixu Paatelainen in October has not had the desired ‘new manager’ effect. Paatelainen has been unable to produce a sustained upturn in form, with only two league victories all season. The Finnish boss has recruited some impressive names in his short spell so far however, with former Liverpool striker Florent Sinama-Pongolle joining Guy Demel in signing short-term deals at Tannadice. Paatelainen has also brought in Japan goalkeeper Eiji Kawashima and Finnish attacker Riku Riski. None of these signings have as of yet made an instant impact though, and time is not something that is on United’s side.

There is little to suggest that Dundee United can pull off the footballing miracle required to stay in the Scottish Premiership, but if there are to be shoots of recovery they must come within the next fortnight. The Arabs face closest relegation rivals Kilmarnock at home on Saturday before an away trip to 9th place Partick Thistle – who are level on points with Kilmarnock and Hamilton. Nothing in football is impossible until the maths make it so but in Dundee United’s quest for top flight survival it really is a case of now or never over the next fortnight.