Entering this season, many of the Manchester United supporters wanted to Dimitar Berbatov out the Old Trafford exit doors, but now they are singing a different tune following his impressive performances this season.

The Bulgarian bagged his first hat-trick and all three of United’s goals, which ultimately spared their blushes in 3-2 win over their most-hated rival, Liverpool.

His three goals included two very well-placed headers and an audaciously taken bicycle kick, which will be one of the favorites for goal of the season.

What was so impressive about Berbatov’s treble of goals was not that he will enter United folklore being the only modern-day for scoring a hat-trick against Liverpool, or his wonderfully taken overhead kick, but his two well-taken headed goals.

The only aspect of his game that has disappointed all of his fans has been his lack of aerial ability, but as he showed against Liverpool, he does have that in his locker if he needs it. Both of headers left a well-positioned Pepe Reina with completely no chance of saving them.

Replacing
With Wayne Rooney suffering for an unexplainable dip in confidence, someone needed to grab the goal scoring responsibilities by the scruff of the neck. And that is exactly what Dimitar has done – and has done admirably as well.

His goal tally for the season in all competitions stands at seven goals and six of them Barclays Premier League, which is half of the amount of goals he scored in the entire 2009/10 season in just six matches.

Because of Rooney’s form and Sir Alex Ferguson’s preference to play with one striker last season, Berbatov made 33 league appearances, and since the majority of them were from the substitute’s bench, he only managed to produce 12 goals from them.

The high price tag – £32 million – that Sir Alex paid for his services put a massive amount of pressure on his shoulders to score goals – not to just put in match-turning performances.

Rooney has proved – with both England and United – that he is a very difficult style of player to partner someone with, so that was another reason as to why his opposers thought so lowly of a player who had a burning desire to play his football at Old Trafford.

Despite some booing from sections of the United supporters, Berbatov showed glimpses of the player he was at Tottenham and Bayer Leverkusen, but the goal return was what most of these uninformed supporters craved from him.

Intelligence
Ferguson has recently called him a genius, which is an ultimate compliment and makes perfect sense.

A genius has a real problem relating with other members of society, because he is not on the wavelength as them, and so they are often seen as being weird or arrogant.

The vision, passing and awareness that Berbatov holds is second-to-none and when he first came it was hard for his United teammates, who are some of the best players on the planet, to keep up with him and be on the same page.

There were also reports that Berbatov was a bit of a loner amongst his United teammates, but as we saw with his goal celebrations against Liverpool, that could not be further from the truth now, because everyone of his teammates ran to congratulate him on each of his three goals.

Some of the United supporters did not welcome Berbatov’s arrival, because it ultimately signaled the end of to fan-favorite Carlos Tevez’s time at Old Trafford.

Those supporters saw him as lazy and labeled him, “Berba-flop,” because he did not run around like a chicken with its head cut off.

Berbatov has never been blessed with natural athletic ability, but he makes up for that by being an intelligent footballer on and off the ball.

In spite of this critic of his game, Dimitar decides to conserve his energy to do what he is paid to do – aid the United attack.

He is a very clever player who can create something out of nothing, and does a commendable job of involving his teammates in the attack. Berbatov is deceptably strong and has the footwork to take on the biggest and quickest of defenders.

Despite the criticism of him not defending or tracking back, Berba is one of the first to line-up to help defend a set piece.

Sir Alex claimed that his only squad fauxpa in the nil-nil draw with Rangers was the omission of Berbatov, because he is the player that has the ability to unlock a defense with either passing or his off-the-ball movements.

The latter of the two is most critical, because he could very easily pull the most-disciplined of defenders out of their position – even if it was just for a split second.

The confidence that the Gaffer has in him has apparently spilled over into his performances this season, and its a good thing that manager makes the decisions and not the fans.

If they had their way, Berbatov would be playing his football elsewhere and United would be even further adrift of Chelsea atop of the Premier League standings.

Even though he played in England for two seasons prior to him moving to Manchester, he had to get used to playing a cup final every week rather than maybe once a season with Spurs.

Berbatov found out quickly that he needed to produce in every game or he faced a lengthy spell on the sidelines as there are players waiting to pounce for his place in the United XI.

Contrary, his impressive displays this season have kept Michael Owen, Javier Hernandez and Frederico Macheda on the outside looking in.

The most exciting of watching Dimitar Berbatov this season, is that he seems to be enjoying his football, and Manchester United will be the ones that benefit the most from his newly-found enthusiasm. 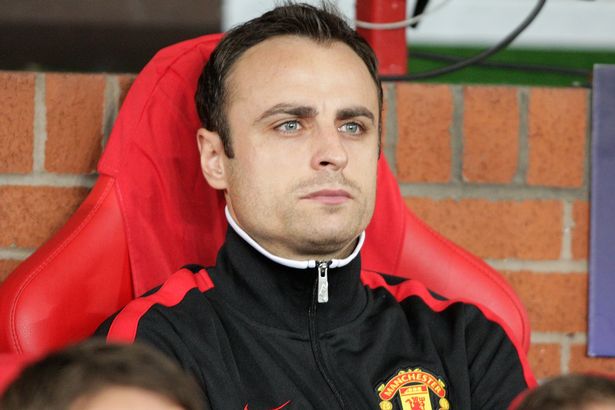