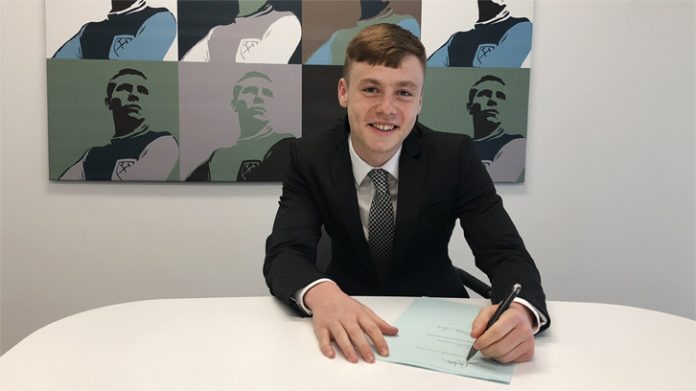 The 19-year-old winger has signed a three-year contract with the Hammers which will keep him at the club until the summer of 2021.

Kemp joined West Ham from Chelsea two years ago and he has been superb for the youth teams. Kemp was expected to make giant strides towards the first team last season but cruciate ligament damage kept him out of action since the end of November.

The highly-rated winger will now look to force his way into Pellegrini’s plans next season. The 19-year-old can operate on either wing and he could be a valuable squad option.

The winger has already made his first-team debut against Burnley during the 2016/17 season.

Kemp needs to regain his match fitness and confidence first. An important pre-season lies ahead for the West Ham starlet.

Speaking to the club media, Kemp said: “I’m absolutely delighted to sign a new contract extension with West Ham. I’m really, really happy and I’m really looking forward to the future. It’s exciting obviously that there is a new manager in charge to impress and that’s of course what I’ll be trying to do when I’m back fit. You want to impress him in every aspect. I want to be training with them and the aim is to make my debut so that’s what I’ll be pushing, for now, I’ve signed this new contract. Ever since I’ve come to the Club, I’ve been happy with my progress and the work I’ve done each season. Obviously last season I had the unfortunate setback of my injury, and that was frustrating but I’m now really keen to kick on from this and the contract is a great boost for me. Also I have to thank Terry Westley [Academy Director] and Liam Manning [Assistant Academy Manager] because they have kept pushing me every day in training and in matches to help produce my best performances.”

Welcome to the club hope you become a club legend