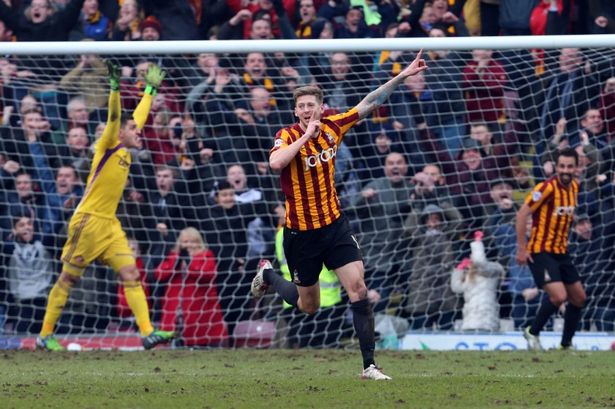 The ingredients were there, a lower league side with a formidable record against higher level opponents in recent seasons, a top tier side currently engulfed in a relegation struggle and a pitch that had cows been grazing in the goalmouth on what was left of the greenery pre-kick off, not an eyebrow would have been raised. Mix in a sold out raucous crowd, a League One team that had conquered Premier League leaders Chelsea in the previous round and a Sunderland side whose manager publicly lambasted direct football in a week when it was clear to see the Valley Parade surface would require a tactical tweak away from a short passing style. All these combustible elements for an upset were present, the live television cameras, were not.

We hear all too often about the romance of the FA Cup, yet on the day after Valentine’s Day, this most attractive of cup fixtures was overlooked, all dressed up with nowhere to go. “It’s not you, it’s me” the BBC claimed, they couldn’t be sure if Sunderland would beat Fulham in a replay, but Fulham are still a division higher than Bradford and this is their first campaign outside the top flight after a 13 year relationship, how quickly they have been forgotten. Is it just matches that involve Premier League teams beaten by lower league opposition that constitutes a shock?

The context of a cup run must play a part but Bradford’s back story in the previous couple of rounds of this year’s competition is fascinating. Millwall, of The Championship, had been thumped 4-0 in a replay after a thrilling 3-3 draw the first time around. Then even more intriguingly, they had provided one of the greatest shocks in FA Cup history, or the greatest, ironically enough, as voted for by BBC viewers on Match Of The Day. Not many teams go to Stamford Bridge and beat Chelsea, Jose Mourinho’s Chelsea, after going 2 goals down. None to be precise.

Television companies have the power to decide what football it feels we should be watching, but when it comes to the FA Cup it would appear they have been sucked into the Premier League bubble. Not to mention the much needed financial benefits television money brings for lower level sides, surely we should be seeing matches that can only be cup matches and taking a rare opportunity to give national exposure to smaller clubs whilst they are still in the FA Cup, that’s the whole point, right?