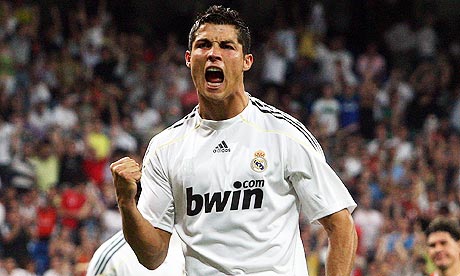 Cristiano Ronaldo scored his 100th La Liga goal for Real Madrid in the side’s 5-1 win over Real Sociedad at the weekend, setting a new club record for the least amount of games to reach his century; 92. The Portuguese attacker commanded a world-record fee when the Santiago Bernabeu side acquired him for £80million from Manchester United in June 2009, but that investment may well be set to pay off this season as he spearheads Los Blancos’ quest for honours.

The debate over who the best player in the world game is rages on, however there are only two contenders; CR7 and Barcelona’s main man Lionel Messi. The Argentine forward has won three consecutive Ballon d’Or awards ahead of Ronaldo, partly due to his sparkling individual performances and the Blaugrana’s success in Europe and in Spain. Messi has delivered in the biggest games and on the highest stage and his frequent match-winning performances against Real Madrid give him the edge over his closest rival.

However, Ronaldo’s achievements since he moved to Spain have been nothing short of phenomenal. When he left Old Trafford, the then 24-year-old was largely deployed as a winger, with his masterful skill and pace commanding such an extortionate transfer fee. Since moving to the Primera Division giants, Ronaldo has added increased strength, agility and fitness to his game, with his physical athleticism frightening. Jose Mourinho uses his main weapon in a more central capacity, and the attacker’s clinical nature and goalscoring ability are there for all to see.

Last term, despite the dominance of Barcelona at home and abroad, Ronaldo won the Pichichi for La Liga’s top goalscorer with 40 goals; he became the first player to ever scored 40 goals in the Primera Division. This season he is locked in a battle with Messi once more, with 50 goals in all competitions already, 35 in La Liga. Ronaldo is tenth in the Spanish giants’ all-time top goalscorer list, and quite incredibly, if he hits the net against Mallorca and Barcelona in the reverse fixtures this term, will have scored against every team in the top flight in the one campaign.

Ronaldo won the Ballon dOr in 2008, beating Messi into the runners-up spot, and although his adversary has been recognised in an individual stance since, Ronaldo must be considered as the second best player in the world, with small margins between the top two.

The difference between the two masterful players can be measured in a couple of ways. The South American’s ‘good guy’ image of being wholesome and iconic gives him a head-start on the at times temperamental and fiery Ronaldo. Similarly, Barcelona’s success, although largely down to Messi, has helped the Argentine to claim individual praise ahead of Ronaldo, whose Real Madrid side have been outplayed by the Catalans.

However, with the capital-city side currently leading La Liga by six points and undefeated in the Champions League, the balance of power between the Clasico rivals hangs in the balance. Should Mourinho lead his side to glory this term, Ronaldo must be awarded the recognition bestowed on Messi over the last three years in Barcelona’s dominance.

ICONS.com are currently running a compeition to win a signed Cristiano Ronaldo jersey, enter here for your chance to win a once in a lifetime prize!