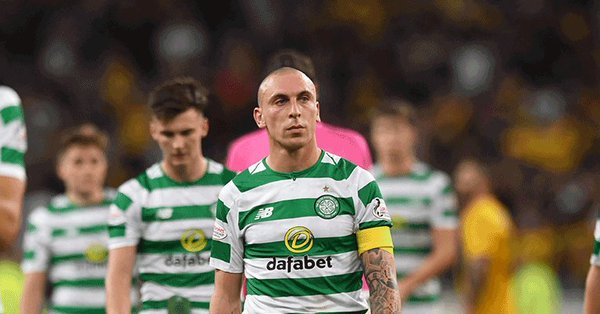 Celtic will not play in the Champions League group stage this season after the Bhoys suffered a 3-2 aggregate defeat against AEK Athens in Greece on Tuesday.

The Bhoys were held to a 1-1 draw at Parkead last week and as a result bowed out of the Champions League qualifying stage for the first time under Brendan Rodgers’s tenure.

Rodgers has blamed poor defending as the major reason behind their loss with Celtic finding themselves two down after 50 minutes in Athens.

Scott Sinclair’s strike with 12 minutes to play left Celtic needing to score once more to progress to the play-off round on away goals. In the end, they couldn’t find the equaliser.

The defeat will only mount pressure on the club, as reports of unrest between Rodgers and the board over a failure to strengthen the squad having already surfaced.

Former Celtic player, and now a popular football pundit, Chris Sutton has urged the club to sort out the mess and stop playing the blame game.

He said on social networking site Twitter that Celtic’s poor recruitment is the main reason behind their early slump in form.

The blame game has to stop and it’s time for cool heads at Celtic… the manager and board could have handled things better! Celtics poor recruitment is the reason they are out! I don’t care about disco lights..time to sort this mess out starting with Boyata

Sutton is absolutely spot on here. Celtic have a strong team but Rodgers still needs new faces to bolster one or two areas of the squad.

Furthermore, Celtic must come to a decision quickly regarding Dedryck Boyata, who refused to travel with the squad for this crucial Champions League tie.