Another London derby and arguably the biggest of the 2014-15 season so far as Chelsea and Arsenal go head-to-head after UEFA Champions League ties midweek.

José Mourinho has every reason to feel the more confident of the two managers, going into this match with a six-point advantage over the opposition, whilst Arsène Wenger’s side were plagued by injuries.

Chelsea were 6-0 winners in this match back in March but Kieran Gibbs had been sent off early on after the Blues raced into a two-goal lead.

Ramires and Didier Drogba are the two absentees for Chelsea this weekend. Neither had been first-choice for Mourinho this season. Diego Costa played 90 minutes again midweek. Despite Mourinho claiming he cannot do two games a week we’re starting to believe this may be mind games now. It would be a shock not to see the Spaniard start this game.

Full-backs Mathieu Debuchy and Nacho Monreal are both out. Midfielders Aaron Ramsey and Mikel Arteta are also out. Forward Theo Walcott is still not ready to return. Strikers Olivier Giroud and Yaya Sanogo are both injured too.

Jack Wilshere only made a late appearance midweek and is ready to go. Alexis Sánchez had ice on his ankle at the end of the Galatasaray game but the Chilean will be fit to start this one. 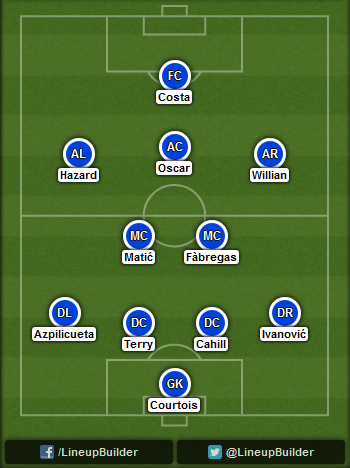 This is José Mourinho’s strongest squad and we’re confident he’ll go with this XI. Willian appears to be winning the right wing battle with André Schürrle. The German international was wasteful midweek when he was given a start. 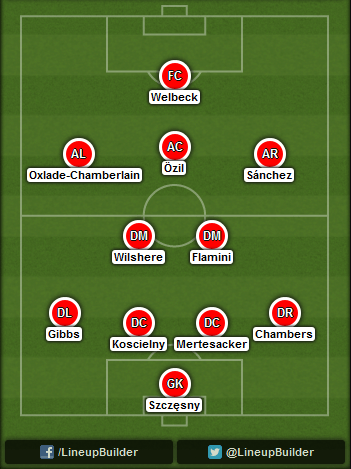 This is the best lineup Arsène Wenger has available. He suggested Jack Wilshere will play is why we have stuck him in there. Also because Mathieu Flamini will be in need of a serious amount of help versus this Chelsea midfield. Alex Oxlade-Chamberlain is a player in form. Alexis Sánchez was surprisingly left out last weekend but he has to play this one, surely.

Cesc Fàbregas vs Mathieu Flamini
The former-Arsenal captain has been opening opponents up left, right and centre to start his Chelsea career. With how open the Gunners were at home to Tottenham last weekend, Cesc Fàbregas could have a field day on Sunday, particularly on any counter-attack should Arsenal bomb forward as they do. We’re not a big fan of Mathieu Flamini in the holding role – he gets exposed too often and has been at fault for a few goals this season already. Don’t be surprised if there are gaps in the centre of Arsenal’s midfield and for Jack Wilshere to receive at least one yellow card when he’s having to dive into tackles in an attempt to rescue possession for his side.

Diego Costa vs Per Mertesacker
Arsenal’s defence has been caught out on a couple of occasions this season and now they face the Premier League’s top goalscorer. Diego Costa is lethal in the six-yard box so if his widemen can supply him with chances then he’ll get himself on the scoresheet. We can see more of the opportunities coming from down the middle in this match though – Costa can also score one-on-ones from through balls. Either way, it doesn’t look good for the Arsenal defence.

Alex Oxlade-Chamberlain vs Branislav Ivanović
Arsenal do have an attacking threat of their own and Chelsea have conceded a few goals this season. Although Mourinho’s side have kept nine clean sheets in their last 11 league games at Stamford Bridge. Whether Branislav Ivanović will bomb forward in this match or be asked to stay back more often remains to be seen. Either way, if Alex Oxlade-Chamberlain starts on the left he is capable of taking on the Serbian and being productive in this match. He scored the Gunners’ equaliser last weekend.

Prediction Chelsea 2-0 Arsenal
We’ll be conservative to avoid any backlash from Arsenal fans but we are expecting a comfortable Chelsea win, make no mistake about that. Arsenal’s defence and defensive midfield really does not match up well on paper to this high-flying Chelsea side. It’s just a matter of how conservative José Mourinho plays this one, and if his side do go up by one or two goals – does his sit on the lead or look to rub salt in the Arsenal wound? Home win.