Chelsea rekindle their old interest in Roma midfielder Radja Nainggolan with a formal approach for the Belgian, but once again their offer has been rejected outright.

According to reports from Italy’s pink newspaper, Gazzetta dello Sport, Roma have rejected a €40m offer for Nainggolan from Chelsea. 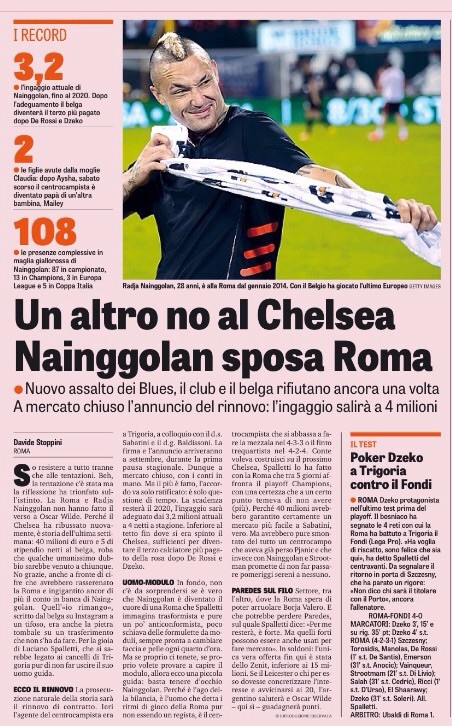 Back in June, Chelsea showed a genuine interest in signing Nainggolan and offered €32m with an additional €3m bonuses for the Roma midfielder, but the Giallorrosi were reluctant to sell him having already sold Miralem Pjanic to Juventus. To be fair, Nainggolan flirted with Chelsea for a while but in the end, he decided to stay put in the capital club.

Chelsea seemed to have moved on after the early setback and signed N’Golo Kante from Leicester City bolster the midfield. The Blues have recently offered him a wage package of €5m-per-year, but it won’t be enough to lure him to join Stamford Bridge this summer.

Nainggolan wants to continue at the Serie A club, and the next step for him will be a contract renewal with Roma. The midfielder currently earns about €3.2m-per-year, and the new deal will make him the third-highest paid player at the club after Dzeko and De Rossi.

At this moment, it seems difficult for Chelsea to lure Nainggolan away from Roma. He is well settled with his family in Italy but most importantly may not want to join a club that cannot offer him Champions League football at the moment.