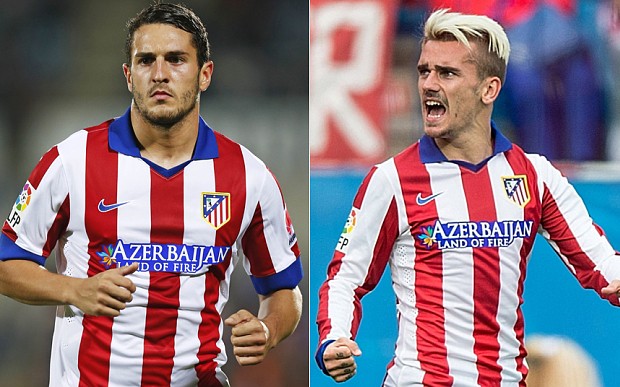 Atletico Madrid are looking to fight off the interest of Chelsea in two of their best players – Antoine Griezmann and Koke, by offering the duo lucrative deals at the club, the Telegraph has reported. Jose Mourinho has been hot on the heals of both these players according to recent news stories, but the La Liga side hope that the renewed £100 million release clauses will fend of the Blues.

Griezmann has scored 25 goals for Atletico in all competitions this season and has proved an able replacement to Diego Costa, who moved to Chelsea last summer. The newly-crowned English Premier League champions though, are looking to further add to their squad, and have expressed genuine interest in the Frenchman, whose current release clause is at £43 million. The 25 year-old has sought advice from his agent Jorge Mendes, and has not pledged his future to Atletico just as yet.  Mendes, who also happens to represent Mourinho, was instrumental in bringing Costa to Stamford Bridge last summer.

Midfielder Koke, on the other hand, is said to be happy in Spain, but with Chelsea on the lookout for a central midfielder for next season, there could come along an offer the Spaniard will find difficult to refuse. According to the report, Atletico manager Diego Simeone is desperate to keep his best players, after losing both Costa and left-back Filipe Luis to Chelsea last summer. His side won the Spanish league in the 2013-14 season and also reached the Champions League final. This year though, they have dropped down to 3rd in the table.

Mourinho is once again looking to act quickly in the transfer market. That was one of the cornerstones of his success last year, as he was one of the first movers and got all the resources he required well before the campaign began. This allowed the new players to gel together in pre-season and to establish dominance right from day 1 in the league.

It is unlikely that Chelsea will go for Griezmann and Koke if they have to pay £100 million. Even though they are top-quality players, the Blues are no longer purely a buying-club, as they look to balance the books and remain well away from any non-compliance of the Financial Fair Play (FFP) regulations.