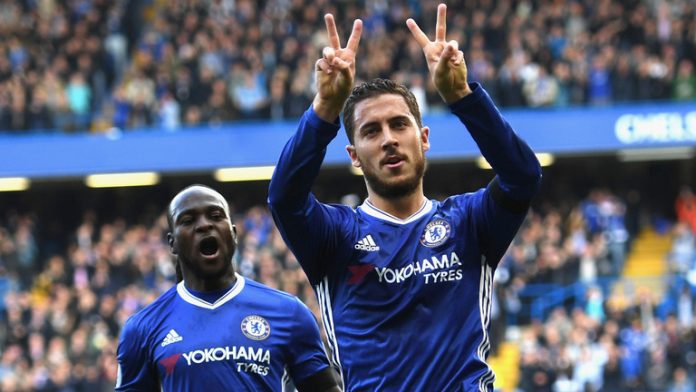 Real Madrid’s hopes of signing Eden Hazard have been boosted after it was revealed that the playmaker has rejected two contract extensions at Chelsea.

The Belgium international’s current deal is due to expire in 2020, but Chelsea are desperate to secure his long-term future and end talk of a switch to Madrid.

Hazard has been heavily linked with a move to La Liga over the past few months, with Madrid touted as his most likely destination.

Their hopes of signing Hazard could rest on whether Zinedine Zidane is still manager.

Hazard has stated that Zidane is his idol, but the Frenchman’s future at Madrid is uncertain after a disappointing league campaign.

Hazard has scored nine goals in 26 appearances in all competitions this season and remains the jewel in Chelsea’s midfield crown.

Uncertainty over the managerial situation at Chelsea could be playing a part in Hazard’s reluctance to sign a new contract, with Antonio Conte linked with a move to Paris Saint-Germain.

Madrid will undoubtedly be encouraged by Hazard’s reluctance to agree a new deal at Stamford Bridge and it would be no surprise to see them submit a substantial bid during January.