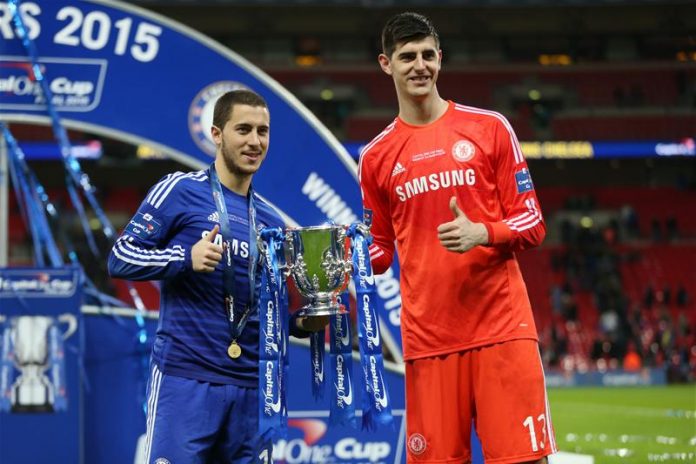 Chelsea and Real Madrid could be set for a mega transfer operation involving four players in the summer transfer window.

The two Belgians are key players for the Blues and Madrid want them to be a part of their squad next season. The report says that Florentino Perez is already preparing a mega-offer to convince Chelsea into parting ways with the Belgian stars.

Madrid could be interested in conducting a possible swap deal involving two players. The report suggests that Los Blancos would like to include Alvaro Morata and James Rodriguez in any potential deal, and their departures would not hurt Madrid at all.

Having failed to sign David de Gea in the past, Madrid have set their sight on signing Courtois. The 24-year-old has a prior experience of playing in La Liga, having enjoyed three great seasons at Atletico Madrid.

Likewise, Zinedine Zidane, the Madrid boss, admires Hazard and would love to add him to the squad.

Both Morata and Rodriguez are not regular first team players and they would be open to a move.

Antonio Conte could be interested in signing Morata if Diego Costa leaves the club in the summer. Rodriguez is another player who would seamlessly fit into Conte’s starting eleven.

However, it will be extremely difficult for Madrid to prise the duo away from Stamford Bridge as Chelsea will return to Champions League next season.