PSG midfielder Blaise Matuidi’s future has come under intense speculation this summer. New PSG boss Unai Emery hopes to retain the services of the French midfielder, whom he described as a “fantastic” and a “great” player, for the 2016/17 season, however, PSG could be open to selling him if they receive a good offer.

Matuidi has more than two years remaining on his contract with the Parisien club but he has told his agent of his desire to venture a new experience abroad. 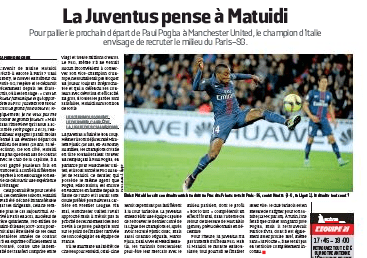 His wishes may come true this summer. Since joining the club in 2011, Matuidi has become an integral part of PSG and the club declared him as “non-transferrable” in earlier transfer windows. The situation has changed now. PSG will be willing to sell him should they receive a fee in the region of €20m-30m. The player has always shown great devotion to the club and the French champions will not block his way if he wishes to leave this summer.

Serie A champions Juventus are reportedly interested in signing Matuidi. The Bianconeri have already bolstered the midfield by signing Miralem Pjanic from AS Roma and could make a move for the Frenchman if Paul Pogba leaves the club this summer.

Manchester United are thought to be leading the race for Pogba but the Premier League giants also retain an interest in Matuidi. In fact, the Red Devils see him as a plan B option if the Pogba deal falls through.

According to reports from L’Equipe, Premier League giants Chelsea are also seemingly interested in Matuidi. The Blues have already signed French midfielder N’Golo Kante from Leicester City and could make a move for his compatriot as Antonio Conte reportedly wants to bring in five new faces to the Bridge before the start of the next Premier League season.

As it stands, Juventus have not offered any formal deal to PSG nor to the player. But if Matuidi is interested, the Turin giants would move quickly for him and are even willing to make him one of the highest-paid players at the club with a €12m-per-year wages.