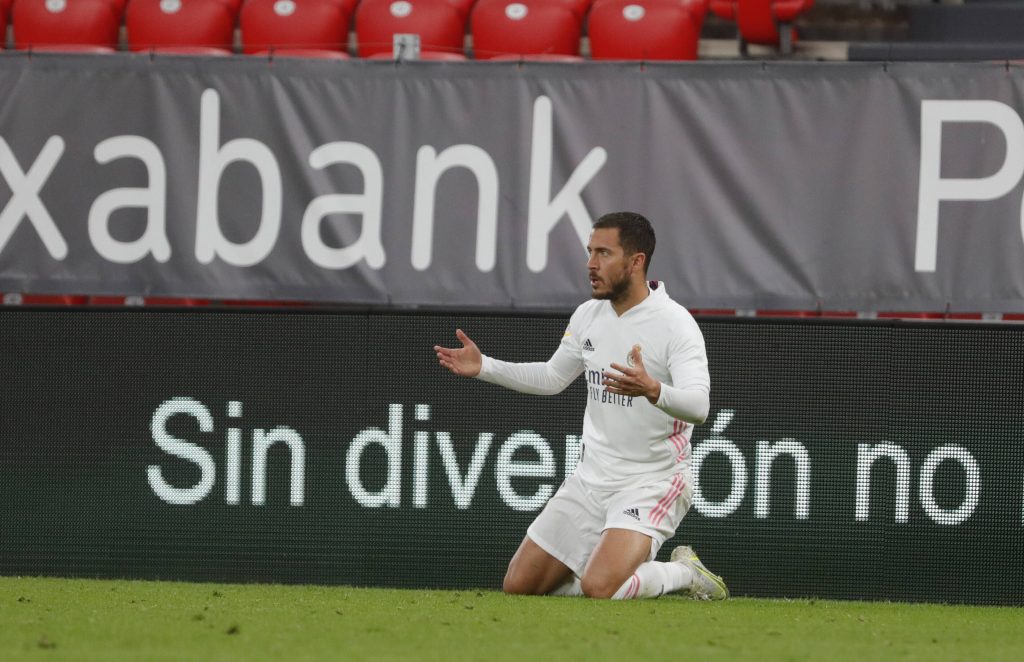 Chelsea don’t have plans to re-sign Eden Hazard from Real Madrid in the forthcoming transfer window, a report from Sunday World claims.

Hazard has endured a tough couple of seasons with Los Blancos due to regular injuries, and it was recently claimed that he would be interested in rejoining the Blues.

It is now reported that the west London outfit have been made aware of his availability, but they are unlikely to prioritise a move for him this summer.

Their main focus lies on landing a new striker, with Romelu Lukaku the prime target. Borussia Dortmund’s Jadon Sancho is an option to bolster the wide attacking department.

Hazard had a terrific career with the Blues between 2012 and 2019, registering 110 goals and 92 assists from 352 appearances in all competitions.

Since his move to Madrid, he has suffered numerous injury setbacks. He has bagged just five goals and eight assists from 43 appearances for them.

With just over two years remaining on his contract, Los Blancos appear prepared to cut their losses and are open to selling him for £43 million.

The prospect of re-signing Hazard has been met with positivity from some Blues fans, but he appears past his prime while his fitness levels are a concern.

The club’s main concern this term has been the inability to convert their chances created on goal. Last summer’s signing Timo Werner has failed to make his mark.

Unsurprisingly, the club are prioritising a new striker, while a move for Sancho seems more worthwhile than gambling on the fitness of Hazard.

Sancho, 21, is coming off a brilliant season for Dortmund with 16 goals and 20 assists despite missing more than 10 games through injuries.

United are considered favourites to sign the £77m-rated man, but the Blues could boost their chances of signing him by offering Callum Hudson-Odoi in exchange.

They still need to convince the attacker, who seems determined to join the Red Devils after a failed approach during last summer’s transfer window.