Chelsea were linked with the highly-rated Napoli defender, Kalidou Koulibaly, during the summer.

However, the transfer never happened and Antonio Conte ended up signing former Chelsea star, David Luiz, instead. The Italian giants rejected all offers for the Senegalese defender and offered him a bumper new contract.

According to the latest reports from Gazzetta Dello Sport, Napoli are now open to discussing Koulibaly’s potential transfer after having signed two good defenders. Napoli signed Maksimović and Tonelli in the summer, and are open to negotiating a sale should an offer arrive in future. 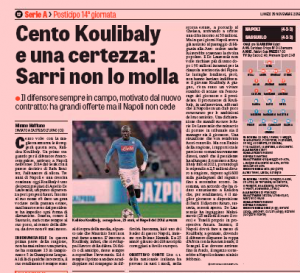 It is important to mention that the report doesn’t mention Chelsea’s interest in the player anymore. It only claims that if Chelsea decide to make a move for him in future, they have a chance of landing him.

Chelsea are likely to sign a defender in the summer, especially with John Terry expected to depart. Koulibaly could be a brilliant addition for the Blues, and could form a solid back three alongside Zouma and Luiz.

It will be interesting to see if Chelsea renew their interest in the player when the season ends, but there is no doubt that any move would be complicated simply because of Aurelio de Laurentiis. The Napoli chief is a tough negotiator and is known to demand a premium for his players.