Real Madrid midfielder Isco is thought to be frustrated with the lack of first-team action this season.

The Spanish international recently confirmed that he will evaluate his future at Santiago Bernabeu at the end of this season.

According to a recent report from Marca, the Real Madrid playmaker is a target for Chelsea, Barcelona, Manchester City and Juventus.

As per the report, Chelsea have already initiated contacts with his representative regarding a summer transfer and are believed to be leading the race to sign him. Isco prefers a move to the Premier League because of two reasons – sporting and financial. 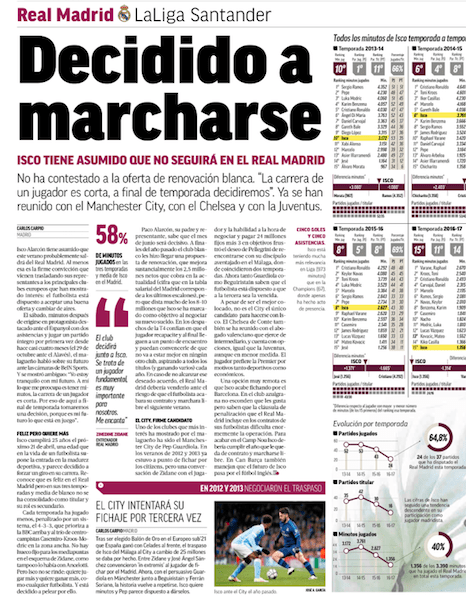 Another major advantage for Chelsea is that Real Madrid will not want to sell the player to a direct rival, Barcelona.

It is no surprise that the Premier League leaders are being linked with players like Isco. The Blues need to add a playmaker to their squad after the departure of Oscar. Furthermore, Fabregas could leave in the summer as well.

Isco is a versatile attacking midfielder, who can operate out wide, in a similar role to that of Willian. The Spaniard would add much-needed depth and flair to Chelsea’s attack. Also, his intelligence and creativity would help Conte break down the weaker sides that tend to sit back.

It will be interesting to see how strong Manchester City’s interest in the player is, at the end of this season. The Etihad outfit already have the likes of Silva, De Bruyne, Sterling and Sane in their side.

The last thing Isco would want is to make up the numbers at another big club. In theory, the player should have more playing time at Stamford Bridge considering Conte’s attacking midfield options apart from Eden Hazard.