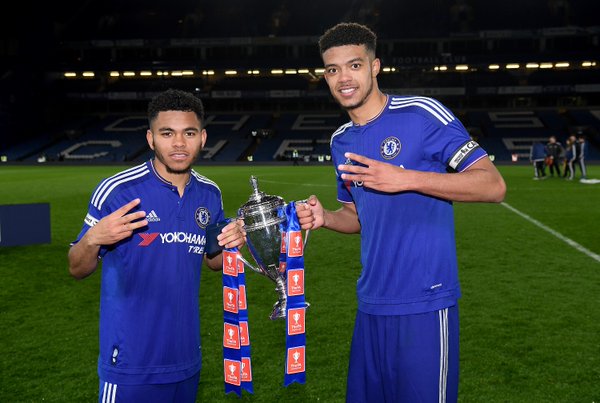 Chelsea’s Under-18 side beat Manchester City 3-1 (4-2 on aggregate) to clinch a third successive FA Youth Cup at rain soaked Stamford Bridge on Wednesday.

The Blues have an overwhelming dominance on this competition, having now won five times in the last seven seasons. The London club also retained the Uefa Youth League last week; the future looks bright at the junior levels.

Dujon Sterling and Tammy Abraham capitalised on errors from City goalkeeper Daniel Grimshaw, while Fikayo Tomori put the icing on the cake with a late header to earn Chelsea academy’s second major trophy this season.

Chelsea Under-18s – #FAYouthCup champions for the third year in a row! ? https://t.co/XfdHueKEIX

The question remains how many of these talented youngsters will actually go on to make the senior grade in the future. Chelsea’s youth academy have been delivering tremendous success over the past six or seven years, and they have some finest young talents in their ranks, but sadly not many of them have gone on to cement a regular place in the Chelsea senior squad.

Dominic Solanke, Charly Musonda and Izzy Brown have progressed into first teams on loan overseas, and Jake Clarke-Salter has played in the Premier League. However, playing a bit part role is one thing and getting regular chances is another.

Back in the 90’s, Sir Alex Ferguson took a bold decision when he drafted a bunch of talented youngsters from the academy into the senior side replacing a few of the senior well established members, and the rest turned out to be a history. Paul Scholes, Ryan Giggs, Nicky Butt, Neville brothers, and David Beckham not only became the spine of the United side for years to come but all of them went on to achieve legendary status at the club.

Should Chelsea do more to make use of their own resources? Instead of sending youngsters on loan and later selling them on a profit, it is high time Chelsea make good use of their own academy talents.