Chelsea midfielder, Cesc Fàbregas, has been linked with a move away from Stamford Bridge since the end of last season.

The 29-year-old Spanish midfielder has struggled to hold down a regular first-team place under Antonio Conte this season and could leave the Blues in January if recent reports are to be believed. Fàbregas’ start against Manchester City last week was only his second start of the season.

As per the latest report from Il Tempo, Fabregas is a target for Serie A giants, Roma, and the Italian outfit are optimistic about their chances of signing him on loan for the rest of the season. The report adds that Roma have close ties with Chelsea director, Marina Granovskaia, and therefore sealing the transfer might not be too tough. However, their reluctance to pay the player’s wages could be an obstacle. Roma are only prepared to cover half of Fàbregas’ €6m/year salary. 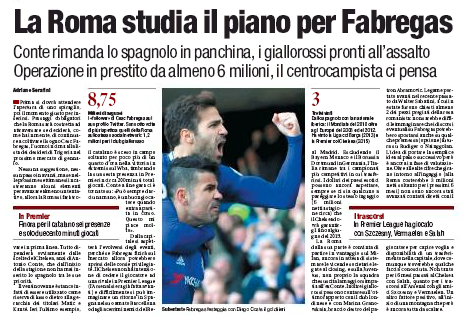 Fàbregas was linked with AC Milan earlier this season, and it will be interesting to see where he ends up eventually. It is evident that he will not be a starter under Conte, and Fàbregas is too good a player to play from the bench. The former Arsenal captain is still at the peak of his powers and needs a move in order to kick-start his career.

Il Tempo adds that Fàbregas will find it easier to settle in at Roma with the likes of Vermaelen, Salah, and Szczęsny. The Chelsea player might find the chance to play with some of his former teammates tempting.

Whoever ends up with the Spaniard will have a phenomenal player on their hands. Despite his defensive limitations, Fàbregas is an elite creator and could improve most teams in the attacking department.