The former Swansea boss, Brendan Rodgers took over Liverpool in June 2012 following the departure of Kenny Dalglish. His first competitive match as Liverpool manager came against FC Gomel in the Europa League. However in the Premier League, Brendan Rodgers lost his first game against West Brom.

The Merseysiders have come a long way from there but they have been unable to claim a top-four spot in the league. Currently, they trail their local rivals by three points and Everton have a game in hand as well. The Reds are seventh on the table with just seven games to go in the season. 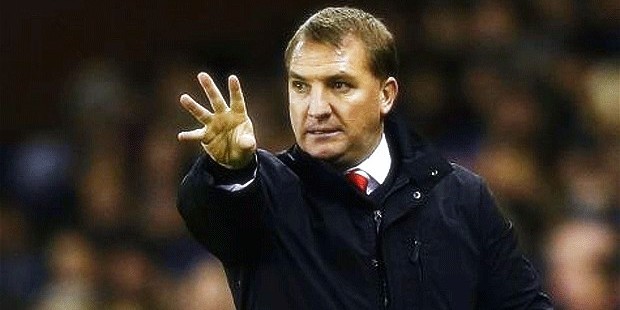 As part of Yahoo’s deal with the League Managers Association, they have spoken with Brendan Rodgers and talked about his plans for the club. Here is part one of the transcript of his interview:

Question: How pleased have you been by the way that Liverpool fans have taken to your project and the style of football that you play?

Brendan Rodgers: I’ve been very pleased because at the end of the day the supporters are the people that count. You always want to win games and to develop the team, so it’s very important that you have encouragement from your fans.

Our supporters have shown exactly why they are so well renowned – I’ve really felt and appreciated their support.

Q: Actions like restoring the original ‘This is Anfield’ sign in the tunnel suggests you have a keen awareness of Liverpool’s history. How important is the club’s link with its past?

BR: It’s everything and things like the ‘This is Anfield’ sign are symbols of the great past. What is also important, though, is that we are not held hostage to our history.

This is an incredible club, you only need to walk into the reception to see a European Cup in the hallway, so you know that everyday you come in you have to be good. It’s important that we use that as motivation and commitment for our future.

The wonderful players and managers that we have had here provide inspiration to us all and it gives us a great focus going forward to try and recreate those memories.

Q: How do you approach the challenge of building a team worthy of great managers like Bill Shankly and Bob Paisley?

BR: First and foremost there is no comparison in relation to those greats of the past; those two managers will always be remembered here.

For someone like me, my job is to build the club again, like Bill Shankly did very successfully and that set up the many successful eras that everyone remembers Liverpool for.

That’s what I’m trying to replicate and it’s a huge challenge, because the club is an institution, but it is a challenge that I’ve enjoyed every minute of and all the staff and players have also. I’ve seen real progress this season and I would expect us to continue that over the next couple of years.

Q: You have spoken about Liverpool as a football family, how important is it for the players to develop a close emotional bond with you and each other, and how do you go about encouraging that?

BR: If you are going to be successful there is no point in having three or four top individual players because those players will win you games but they will never win you titles.

A strong team ethos is very important and no one at Liverpool is asked to do anymore than anyone else, we all share the same work ethic and focus to be the very best that we can. There are many different ways that you can create that ethos but the best way is to do it on the training field everyday.

We set high standards on and off the training pitch for all members of staff and that can be the biggest thing so far as creating a winning culture is concerned, it is something that we continue to work very hard at.

Q: Daniel Sturridge has made a flying start to his Liverpool career, how do you assess his first months and how long had you been looking at him as a potential transfer target?

BR: I’ve known Daniel for a long time, since his early teens, so I’ve been able to follow his progress closely. There had been talk for some time about Daniel coming to the club but we needed to be sure that he was going to be the right fit for what we required.

He has settled in very well, but he still has lots of aspects of his game to work on in order to achieve what he wants to and to allow him to make the kind of impact that we want. He has made a very promising start and as long as he maintains that same level of commitment and responsible attitude to improving, I can see him being a great signing for the club.

Q: Philippe Coutinho has also excited the fans, but there are often doubts about whether a player slight of stature can hold his own in the Barclay’s Premier League. Do you think that notion is a thing of the past?

BR: Very much so, although there is no doubt that the Barclay’s Premier League is probably the most physical league in the world and that can catch players out. He might be slight in stature but he’s still got real power and mental strength too, plus he’s a wonderful technician.

I don’t think that there is any question that he can cope with the physical demands. He’s a Brazilian boy so as well as all the technique, skill and flair; you also find that they are tough. There haven’t been too many Brazilians that have come into this country and have not succeeded.

They tend to be robust and when you mix that with their technical and tactical qualities, I think that a player like Philippe will be a great addition for us.

Q: Does the capture of Sturridge and Coutinho vindicate the decision not to sign a forward in August when Andy Carroll went to West Ham?

BR: We would have liked to bring in a few more players in the summer but we didn’t, and the group were admirable with what they coped in that period because we had a lot of games. We knew we had to bring in reinforcements in January and the board worked superbly to get those players.

We are hopeful that come the summer we can make more additions that will take us on to the next level. So there was no vindication really, just that Andy wanted to play games every week and at the time there wasn’t the availability to bring in a replacement.

The business we did in January however was excellent and that’s a great credit to the club.

For more insight from Brendan Rodgers and other leading managers plus exclusive Premier League highlights go to www.yahoo.co.uk/sport.