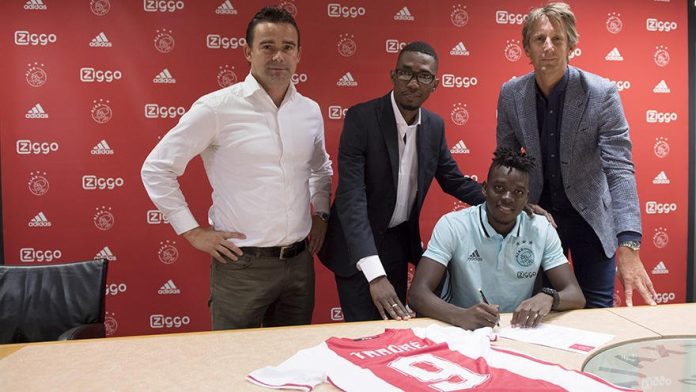 Chelsea striker Bertrand Traore has signed a new deal with the Premier League giants, the club have confirmed.

The highly talented striker has also joined Dutch outfit Ajax on loan for the rest of the season.

A statement on Chelsea’s official website read: “Bertrand Traore has signed a new three-year contract with Chelsea. The 20-year-old will now join Ajax on loan for the 2016/17 campaign as he continues his development.”

Traore scored four times in 16 appearances for the Blues last season and was expected to be a valuable part of the Chelsea first team this season.

However, Antonio Conte has signed Michy Batshuayi and is looking to sign another striker (Romelu Lukaku from Everton). Therefore, a loan move makes sense for the 20-year-old striker.

Conte confirms Bertrand Traore will go on loan to Ajax: ‘He’s a good player and we prefer he plays every game this season.’ #CFC

At this stage of his career, he needs to play regularly at the highest level and Ajax will allow him to do just that.

Traore is expected to replace Milik at the Dutch club. The Polish forward signed for Napoli this summer after impressing at the Euros.

The Chelsea youngster joined the club in 2013 and is the first Burkina Faso international ever to score in the Premier League. Traore, who had a previous loan spell with Vitesse Arnhem, will now stay with Chelsea until 2019.