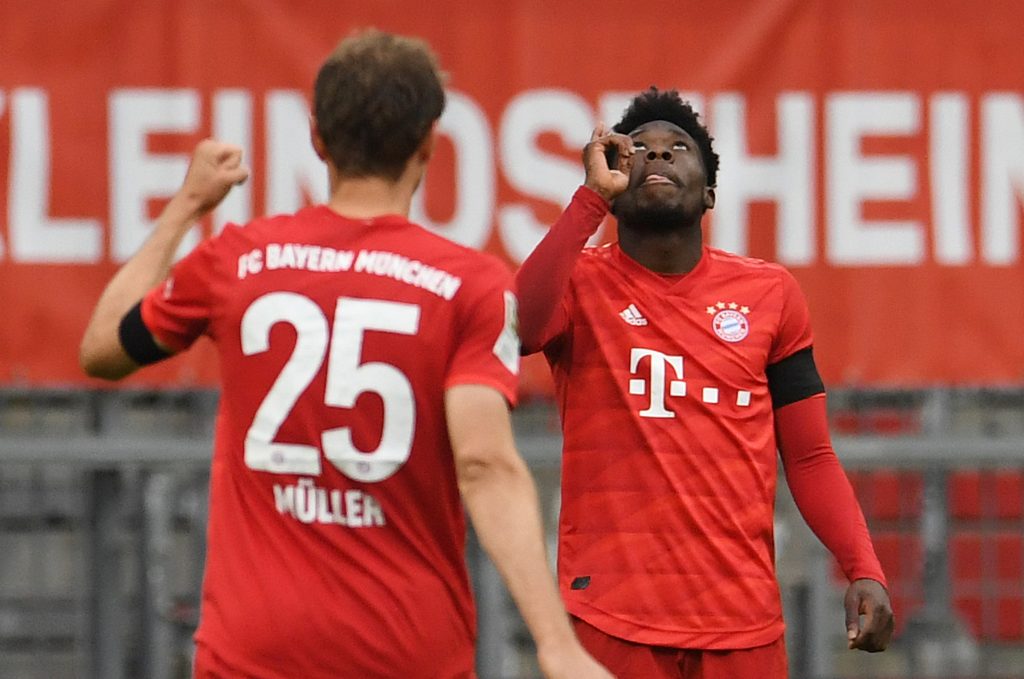 Bayern Munich hosted an out-of-form Eintracht Frankfurt side at the Allianz Arena on Saturday, knowing that a win would restore their four point lead on top of the Bundesliga table.

The home side were better from the get-go, as they mounted tons of pressure on Frankfurt from the start of the match. They almost went ahead when Lewandowski smashed the crossbar from the edge of the box after a corner.

Soon after, Müller ran free down the left flank, and was able to set up Goretzka on the edge of the box, who made it 1-0 with an emphatic finish.

But he would go one better when Davies was able to pick him out in the box, and the German manufactured a classic Müller-esque finish to double the champions’ advantage.

The game started opening up in the second half. The first meaningful play of the second half saw Coman in acres of space on the right flank, and he set up Lewandowski for an easy header for the league leaders’ third.

Frankfurt were a threat from set-pieces, though, and Hinteregger was able to score a scrappy goal from a corner to pull one back

After a few minutes, he was able to head home from another corner, and give a glimmer of hope to the away side.

But then a mistake from the Fernandes, the Frankfurt captain, allowed Davies to steal in and score for the champions.

Hinteregger was then forced to bundle the ball into his own net after Gnabry burst through, to make it 5-2.

Kostić almost scored a brilliant solo goal late on, as he carried the ball halfway across the pitch, before rattling the inside of the post. But the game ended 5-2 to the hosts. 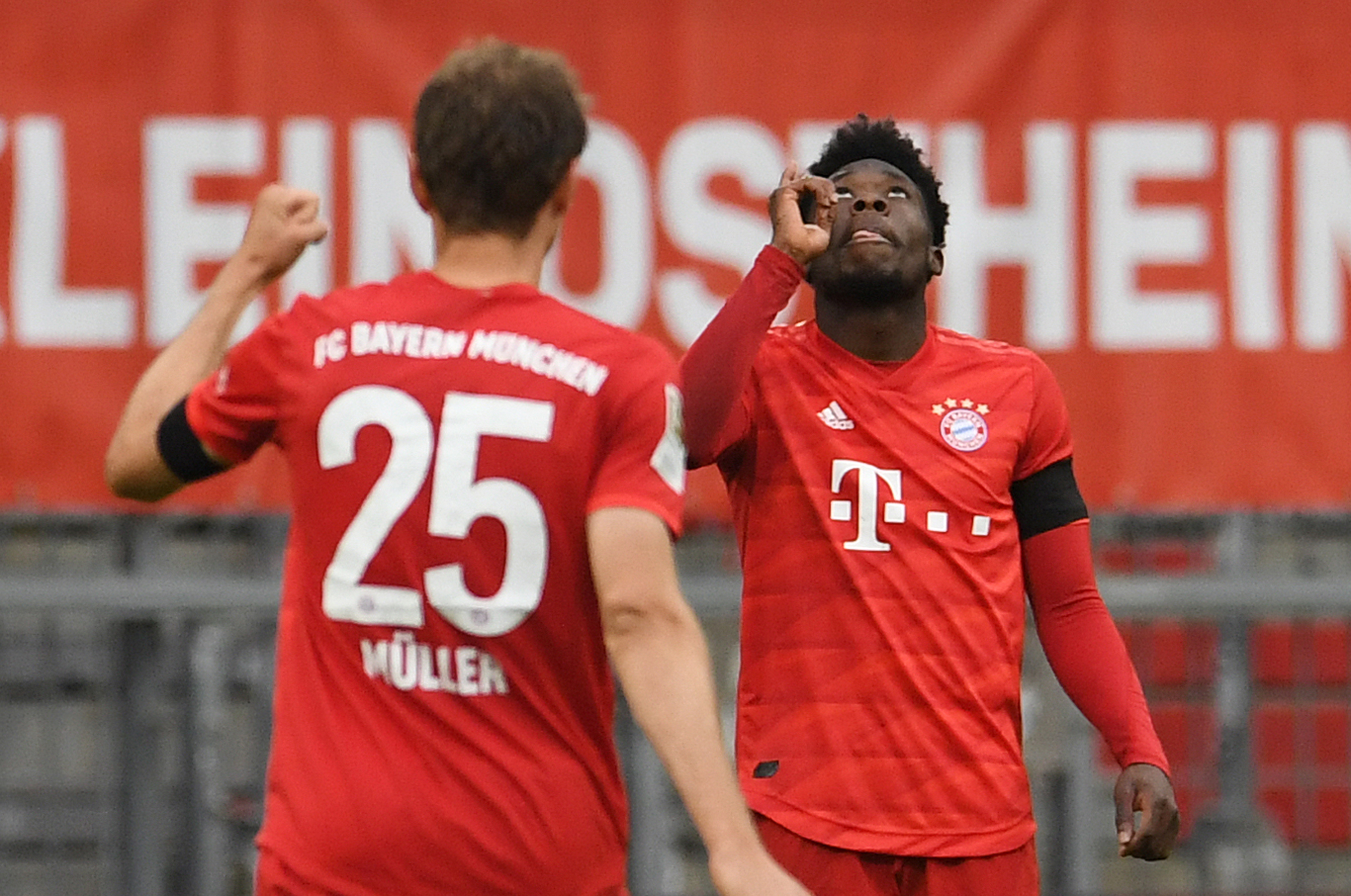 It was evident from the first minute that Frankfurt would spend most of the game absorbing pressure, and the few chances they would be able to muster would be through counter attacks and set-pieces.

Frankfurt’s wingers were mainly tasked with containing the Bavarian full-backs, and preventing them from getting too far forward. In the end, Bayern’s quality allowed them to penetrate through the Frankfurt resistance.

Davies vs da Costa – Alphonso Davies ran riot in the Bayern left wing with his scintillating pace, and though da Costa is not slow, he was no match for him. Davies could often get forward, and even manufactured an assist for Bayern’s second goal.

Pavard vs Kostić – Both managed to nullify each other in attack, and neither could make things happen up front for most parts of the game, except the last 15 minutes. Their stronghold on each other began to loosen as the second half progressed. Kostić started finding more space as the second half drew to a close.

Manuel Neuer – Couldn’t have possibly saved the two goals. Made a decent amount of saves, especially in the second half. 7.

Benjamin Pavard – Contained Kostić for the majority of the match. Got forward sometimes as well but couldn’t make a major impact there. 6.5.

David Alaba – Did well to contain Silva for most of the game. Solid for most parts of it. 7.

Alphonso Davies – Menacing with his pace as always. Gathered the second ball and put in a brilliant cross for Müller’s goal. He even went on to score when a horror mistake from Fernanades gifted hi an easy goal after he burst through the Frankfurt defence. 7.5.

Joshua Kimmich – Took wasteful long shots early on. His passing was sub-par, and he didn’t string the Bayern attack as Thiago generally would. 5.

Leon Goretzka – Had an excellent work rate throughout the match, and scored a brilliant goal with his late run on the edge of the box. His distribution was great as well. 7.

Kingsley Coman – Was a constant threat down the right. Did well to set up Lewandowski for the Bavarians’ third. Made an absolute menace of himself against two different left-backs in two halves. 7.

Thomas Müller – Revelled in his Raumdeuter role. Made darting runs down both flanks, and got a brilliant assist for Goretzka’s goal. He then went one better with a calm take after Davies whipped one in, and then bundled it home. Even had a hand in the Hinteregger own goal. Dwindled in the second half, but you can’t blame him when his side are 3 goals up with a Klassiker coming up. 8.

Ivan Perišić – Was wasteful down the left flank, as his runs lacked end-product. His shots lacked conviction as well. It was a disappointing game for him overall. 5.

Robert Lewandowski – Initially looked threatening but took loose first touches. Almost scored early on when he rattled the crossbar with a pile-driver when a corner fell to him. Linked up well with Müller in attack. Was a major threat in corners as well. Got a deserved goal in the second half with an emphatic header. 7.5.

Serge Gnabry – Did well to lead to the Hinteregger own goal with his penetrating run. 7.

Lucas Hernandez – Solid in defence as he is renowned to be. 7.

Team – Bayern were utterly dominant in the first half. They started well in the second half as well, but then gave away two goals from corners.  They survived the scare, though, but perhaps the scoreline was slightly flattering towards them. 7.

Kevin Trapp – Didn’t do much wrong but didn’t do much right either. Conceding 5 is never great for a keeper. 4.5.

Almamy Touré – Did well to contain Perišić. He made runs forward as well, but couldn’t provide threatening crosses. Could have done better to prevent Lewandowski’s goal. 5.5.

Martin Hinteregger – Bundled in a scrappy goal for Eintracht in the second half. Went on to head home a second. Can’t blame him for the own goal. 6.5.

Stephan Ilsanker – Did well to contain Lewandowski for a good part of the game, especially early on. Denied Bayern a sixth with a crucial clearance. Otherwise, he was cut through easily by the Bavarian attack. 5.5.

Evan N’Dicka – Was no match for Coman’s pace, and failed to stop the attacks on the Frankfurt left wing. 4.

Danny da Costa – His main job was to contain Davies but he failed to do that. Wasn’t a major threat going forward either. 4.5.

Gelson Fernandes – Was nowhere near Müller for most of the game, and he made a terrible mistake to gift Davies a goal. 4.

Sebastian Rode – Did respectably well in defensive midfield to prevent the Bayern from overrunning his side. 5.5.

Filip Kostić – Did very well defensively to prevent Pavard from causing too much trouble down the right flank. He made a few penetrating runs but his crosses let him down. Deserved a goal in the second half when he drove through the defence and struck the inside of the post. 6.5.

Mijat Gaćinović – Was largely uninvolved in the game, but he ran the Frankfurt counter-attacks, which were rare. 5.5.

André Silva – Spent most of the match chasing long balls which he was never going to win. Grew into the game in the second half, and started creating chances for his side. 5.5.

Timothy Chandler – He was switched off when he came on, as he gave Coman an entire postcode to himself, which the Frenchman used to set up Bayern’s third. 4.5.

Djibril Sow – Was rather loose after he came on. 4.

Team – Frankfurt were completely dominated in the first half. After giving away a third immediately in the second, they showed great character to pull two goals back, but then threw it away with a few mistakes, allowing Bayern to coast to victory. They were nowhere near the champions in terms of quality, and have a lot of work to do. 4.5.

Bayern regain their four point cushion on the top of the Bundesliga table with a routine win against Frankfurt. Some might argue that the two goals were a good test in preparation for the upcoming Klassiker.

Either way, Dortmund will surely notice the gaps in Bayern’s zonal marking strategy and look to exploit them. As for Frankfurt, they have a massive match against Freiburg in midweek. They need to get back to winning ways, and fast, if they do not wish to get sucked into a relegation battle.