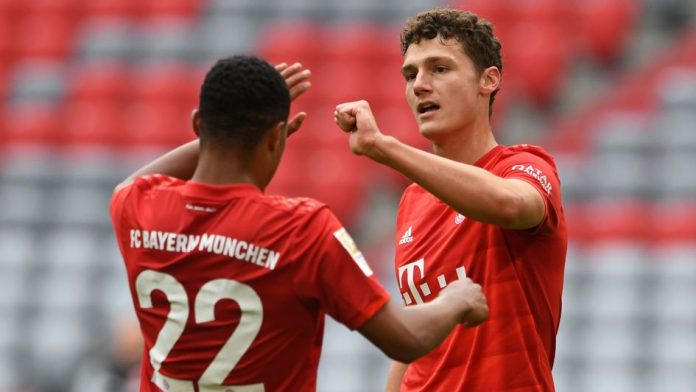 Bayern welcomed Fortuna to the Allianz Arena, with 3 seemingly easy points on offer, extending their lead at the top of the Bundesliga table to 10 points.

As expected, they started off strong, and bagged a goal in the fifteenth minute when Gnabry brought Müller’s cross down for Pavard, and his attempt was bundled into the net by Jørgensen.

Another 15 minutes, and then Lewandowski was able to direct Müller’s cross into an empty net.

The second half so more of the same, and in the 50th minute, Gnabry set up Lewandowski, who scored with an improvised finish.

Only two minutes later, Alphonso Davies waltzed through Fortuna’s defence, and calmly finished to make it 5.

Luckily, Fortuna were able to mitigate the damage thereafter, and so it ended 5-0.

As expected, Bayern were on the frontfoot for 90 minutes. They spent most of the time in Fortuna’ half, as their centre-backs camped on the half-way line. Nothing massive tactically, it was sheer quality which decided the match.

Manuel Neuer – Made the saves when he had to. 7.

Benjamin Pavard – Did well to cause the first goal. Got a deserved goal later on from a header. Strong for the rest of the match. 7.25.

Lucas Hernandez – He was very strong in his comeback performance, as he marshalled the defence. 7.

David Alaba – Solid in his centre-back role as always, and he made a few crucial challenges when he was called into action. 7.25.

Alphonso Davies – The ‘roadrunner’ controlled the left wing with a dominant display, and got a brilliant goal in the second half. He was caught offside quite often though. 7.5.

Joshua Kimmich – A strong performance on the back of his commanding Klassiker display. Bagged an assist from his corner for Pavard’s goal. 7.5.

Leon Goretzka – Good in midfield again, as he did a lot of defensive work too. 7.

Serge Gnabry – He was very lively on either flank, and got an assist from the right for Bayern’s fourth goal. 7.25.

Thomas Müller – Worked very well with Lewandowski as always, as the pair exchanged positions, wreaking havoc in Fortuna’s defence. Got an assist too. 7.

Kingsley Coman – Threatening down the right as always, and decent on the left wing too. 7.

Robert Lewandowski – Nothing new here. A goal a game is this man’s motto, and this time he got two. 7.5.

Álvaro Odriozola – Very good down the right, as his crosses threatened. 7.

Mickaël Cuisance – Heavily involved in midfield from the moment he came on. 7.25.

Team – Bayern were utterly dominant from the kick-off, and they remained so for 90 minutes. They go 10 points clear up top, and it seems that nothing can stop them from getting the 8th consecutive title. 7.5.

Mathias Jørgensen – Can’t be blamed for the first goal, but not a great day for him. 4.5.

André Hoffmann – Had the best chance from 2 yards out, but somehow put it high. Couldn’t do much at the back, though. 4.25.

Niko Gießelmann – Should have done better to prevent the second. Not great in defence. 4.

Gerd Zimmermann – Couldn’t do anything to stop either Gnabry or Coman. 4.25.

Kevin Stöger – He was very wasteful in possession, and his mistakes led to a couple of goals for Bayern. 4.

Adam Bodzek – Overrun in the middle of the park by Kimmich and Goretzka. 4.5.

Alfredo Morales – Couldn’t do much to affect the match. 4.5.

Erik Thommy – Not as lively as he usually is, but tried to make things happen on the left unsuccessfully, because he was unsupported.  His runs were good, though. 5.75.

Kenan Karaman – Tried desperately to make things happen up front. He almost had a goal in the first half but was denied by the Bayern defence. 5.5.

Marcel Sobottka – Not involved much but he picked up a very unfortunate injury.

Team – Fortuna were always going to be second best, and they got battered. But they did well to regroup after conceding 5, and shutout Bayern for almost 40 minutes. Obviously this is not a match to judge their survival chances, but they’ll need to start picking up the points again if they want to stay afloat. 4.25.

Unsurprisingly, Bayern go 10 points clear on the top with a resounding victory against Fortuna. They have one hand on the Meisterschale now, and if Dortmund slip-up, their second hand will get closer. It was a routine victory to be honest.

Fortuna, on the other hand, need points to stay afloat. The next couple of weekends are going to be crucial for them.