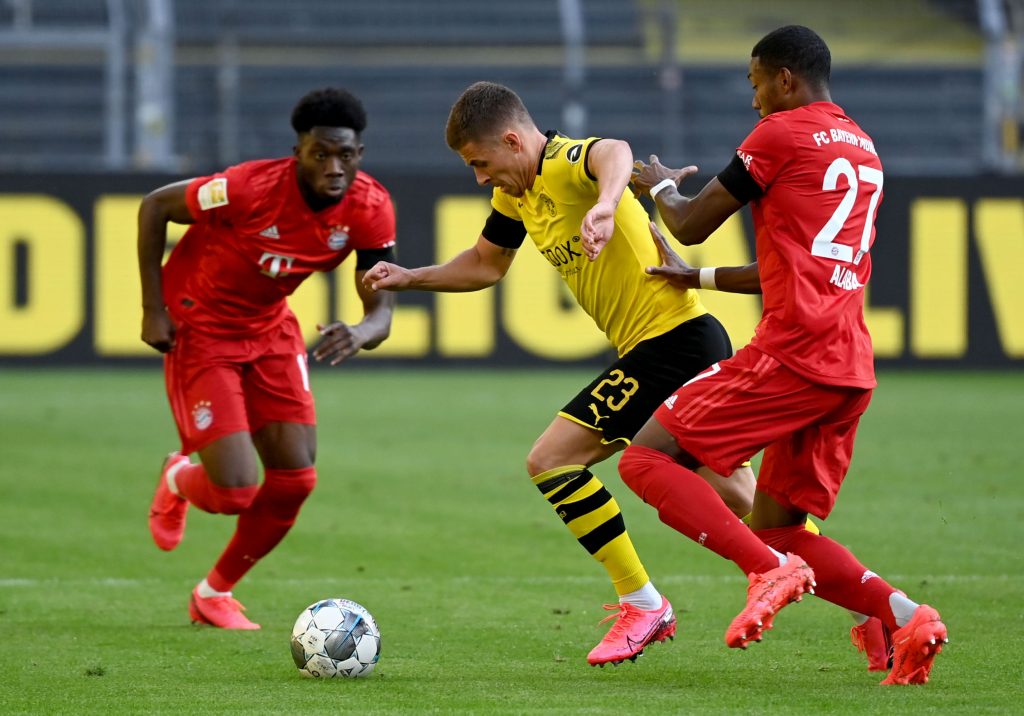 Bayern travelled to the Signal Iduna Park for the biggest match of the Bundesliga season so far – a potentially title-deciding Klassiker against bitter rivals Dortmund.

Within 30 seconds, Boateng was forced to clear off the line after a slow shot from Håland went past the retreating Neuer.

After 20 minutes, Piszczek had to scramble a ball off the line after Gnabry’s shot beat Bürki.

Both teams were great thereafter, but neither could create a major chance – until Kimmich tried to go for an outlandish chip from outside the box, which went past the scrambling Bürki.

Late on, in the 82nd minute, Lewandowski struck the post with a great effort, but the ball went bounced back out.

It was an even affair, but the match ended, 0-1 to Bayern.

Dortmund looked to threaten Bayern out wide in the wings – as they had an extra man there – their wing-backs and wingers caused lots of problems for Davies and Pavard. But Bayern had a numerical advantage in midfield, which they sought to exploit.

Dortmund looked to counter that at half-time as they brought the defensive Can on, along with Sancho to exploit their advantage out wide.

But that didn’t change much, as Bayern continued to dominate the midfield, which settled the match.

Davies vs Hakimi – Davies certainly had Hakimi’s number, as the Canadian kept Hakimi quiet throughout the match, and made attacking forays as well.

Lewandowski vs Hummels – The German did well to contain the Polish striker for most of the match, but unfortunately for him, the goal came from midfield, and he couldn’t possibly have stopped that.

Roman Bürki – Should have prevented the goal. Decent otherwise. 6.75.

Łukasz Piszczek – Made a crucial clearance early on, and was solid overall as well. 7.25.

Mats Hummels – Solid at the back, as he did well to contain Lewandowski. 7.5.

Manuel Akanji – Good at the back, but not as involved as his partners. 6.75.

Achraf Hakimi – He threatened with his pace but his passing was very loose. He was overrun by Davies though. 5.25.

Mahmoud Dahoud – Saw lots of the ball, as he strung his side’s attacks together. His shots from range were nonthreatening, though. 7.

Thomas Delaney – Brilliant in holding midfield, as he made and won lots of challenges. Surprisingly, he was substituted at half-time. 7.25.

Raphaël Guerreiro – Menacing down the left, but he couldn’t create anything substantial. His defensive work was good, though. 6.75.

Julian Brandt – Lively up front, but lacked end-product, as his crosses went astray. 5.75.

Erling Braut Håland – Largely kept quiet by the Bayern defence, but tried his best to convert the few half-chances he had. 6.

Thorgan Hazard – Threatened with his pace early on, but was kept quiet thereafter. 5.

Jadon Sancho – Largely subdued for most of the game. 4.5.

Team – Dortmund were not bad by any stretch of the imagination, as they enjoyed many good spells in the match. But they simply failed to unlock the Bayern defence, which ended up costing them the match. 7.25.

Benjamin Pavard – Did very well down the left to contain Hazard first and Sancho later. 7.

Jérôme Boateng – Solid at the back, as he kept Håland quiet. His presence of mind saved his side early on when he was perfectly positioned to clear Håland’s stray shot. Made many important blocks as well. 7.75.

David Alaba – His distribution was great, and he was solid defensively as well. 7.5.

Alphonso Davies – Great defensively as he contained Hakimi. His pace certainly saved his side a goal when he tracked Håland down, when the Norwegian thought he only had Neuer to beat. Threatened going forward as well, with his silky footwork. 7.75.

Joshua Kimmich – Ran the midfield, and scored with an outrageous chip. He was absolutely everywhere, and he subdued Sancho in the second half. Had a great match. 8.25.

Leon Goretzka – Worked very hard in midfield, both on and off the ball. 7.5.

Serge Gnabry – He was lively down the left, and almost scored when his effort was stabbed off the line by Piszczek. He helped contain Hakimi defensively as well. 7.25.

Thomas Müller – Laboured throughout the game, as he helped Bayern win the midfield battle. 7.25.

Kingsley Coman – Very Threatening down the right. Made notable defensive contributions as well. 7.

Robert Lewandowski – He maintained an outstanding work rate, as he helped out a lot defensively – once even going behind the Bayern back 4 to arrest Guerreiro’s run. Almost scored when he hit the post late on. 7.

Team – Bayern were solid in all aspects, they were steely at the back, and managed to create a few decent chances, though the goal was from a half-chance at best. They won the battle in the midfield, and after the goal, did well to dictate the match. 7.5.

Bayern go 7 points clear at the top of the Bundesliga table, and have pretty much sealed the title unless they slip-up massively. Dortmund may have lost all their title hopes, and will now need to hold off a surge from Leipzig to hold on to second place.