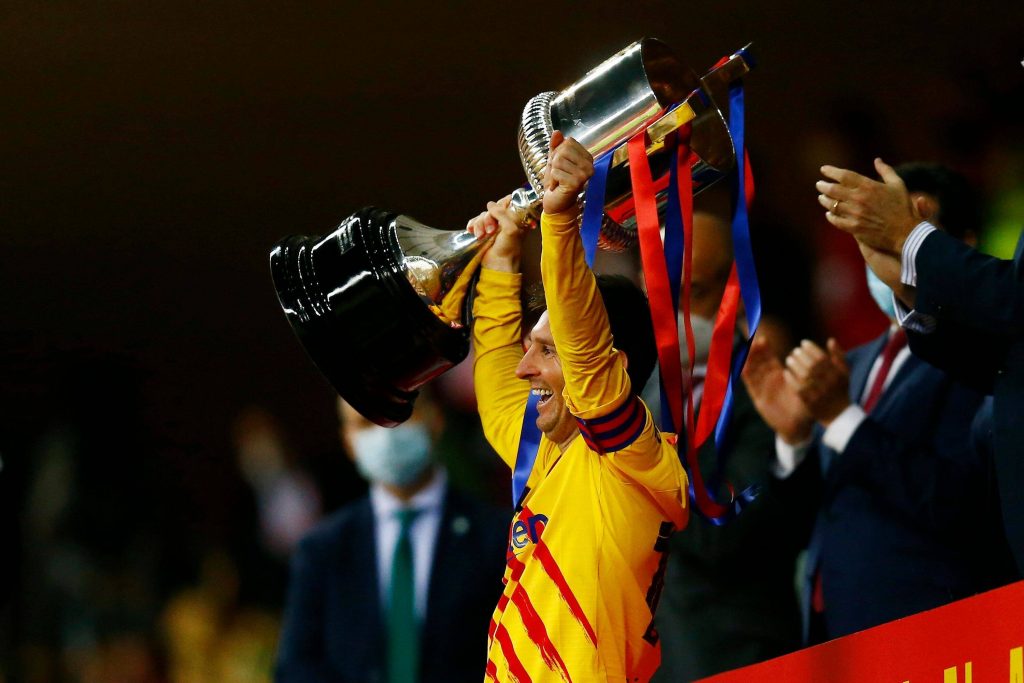 Barcelona have won the Copa del Rey after producing an incredible second half performance against Athletic Bilbao to win 4-0.

Barca made a lively start to the game and nearly took the lead in the fifth minute. Sergio Busquets floated a ball over the top to Lionel Messi, who cut back for Frenkie de Jong. The Dutchman placed his first time shot off the far post.

A few minutes later, Bilbao hit back with a chance of their own. Alex Berenguer swung in an excellent free-kick to Inigo Martinez, but the Spaniard couldn’t direct his effort on target.

They ended the half with 86% possession and seven shots to Athletic Bilbao’s one, but the score remained unchanged.

Ronald Koeman’s men came flying out of the traps in the second half, and three times came close to netting an opener.

The first came when Messi found Dest out on the right. The young American played a low cross towards Antoine Griezmann at the front post, but Unai Simon kept out his close-range effort.

The goalkeeper was again at his best to deny Pedri from breaking the deadlock with a driven shot from the edge of the box. From the resulting corner, Sergio Busquets had a glorious chance to find the net, but Simon made the block with his left leg.

The pressure eventually paid off, and Barcelona took the lead. Messi fed De Jong on the right, and the former Ajax man crossed for Griezmann at the front post, who made no mistake this time.

Not long afterwards, the Catalan giants made it two. Three minutes after assisting the opener, De Jong got himself on the scoresheet, stooping to nod home from inside the six-yard box from Jordi Alba’s cross.

The floodgates had opened, and it wasn’t long before Messi got one for himself in sensational fashion.

After picking the ball up in his own half, the 33-year-old drove forward, skipped past two players, exchanged passes with De Jong, beat another defender, and coolly rolled the ball into the bottom corner.

Messi doubled his personal tally and put the game beyond all doubt in the 72nd minute. Alba recorded his second assist of the game, cutting back for the Argentine, who swept home at the near post for Barcelona’s fourth goal in 12 minutes.

Griezmann thought he had also got his second of the game late on after rounding the goalkeeper and placing into an empty net. However, the goal was chalked off by VAR due to a narrow offside.

The game finished 4-0 to Barcelona, sealing their first piece of silverware since 2019.

The MOTM award could easily have gone to Messi, who lit up the closing stages of the game with two brilliant goals.

However, when things weren’t so easy for Barcelona, De Jong stepped up to the plate and delivered a goal and two assists to put them into an unassailable lead.

The Dutchman hasn’t always lived up to expectations at Camp Nou and had a difficult first season. But since the arrival of compatriot Koeman, he has looked like the midfielder everyone expects him to be.

The Copa del Rey final showcased every bit of improvement he has made. Composed as ever on the ball, hard-working, classy, and now contributing goals and assists. His best night in a Barcelona shirt.

The beginning of a new era?

It’s been no secret that Barcelona have had a difficult few years. Iniesta, Neymar, Suarez and several others leaving, several humiliations in the Champions League, hampering debt, Messi’s transfer request, Bartomeu’s unpopular reign – it’s been a bit of a mess at Camp Nou.

However, there may be some light at the end of the tunnel.

Koeman has been doubted during his time in charge of the La Liga side, but their performances since the turn of the year will be pleasing to the former centre-back.

From their 23 games in all competitions in 2021, they have won 18, drawn two and lost just three. During this time, they have scored 58 goals and conceded 21, keeping ten clean sheets.

Furthermore, their squad is full of young talent. Four of their starting XI are 23 or under, as well as six more on the bench. And that’s not including the likes of Ansu Fati and Riqui Puig, who both missed out.

Another thing to note – Messi is…well…Messi again. He had a slow start to the season but has bounced back with several dazzling displays. If his performances are tied to his motivation, then we cannot doubt that he has rediscovered his hunger at Barcelona.

With Joan Laporta back in charge, and silverware returning to the trophy cabinet, a new era could be beginning at Camp Nou.