Borussia Dortmund & Liverpool have teamed up. At least that’s what the Catalan media seem to believe.

Mundo Deportivo report senior officials at Borussia Dortmund are sharing privileged information with Jurgen Klopp, and that has made things even more difficult for Barcelona in their pursuit of Philippe Coutinho.

Barcelona have reportedly promised Coutinho to make every possible effort to prize him away from the Merseyside club. The Spanish giants could offer as much as €150m, including bonuses. 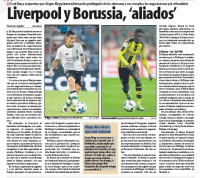 Liverpool, on the other hand, remain ‘uncompromising’ and have no intentions to sell their Brazilian star. Jurgen Klopp, in his press conference, made it quite clear that he is looking to welcome Coutinho back in training.

There have been conflicting reports in the English media on Coutinho. A day ago, Liverpool Echo reported Barcelona have given up hopes to sign the 25-year-old, but Sky Sports are now reporting they could make a fresh bid of £138m for Coutinho.

Coutinho has been ruled out of Liverpool’s clash against Hoffenheim tonight at Anfield, and it seems a bit unlikely that he’ll take the pitch even against Arsenal this weekend.