India
Home News ballon dor who should win it 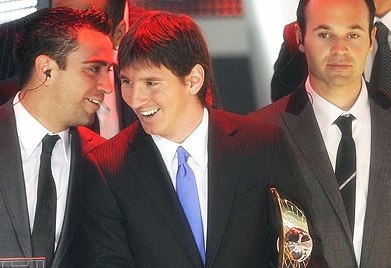 Lionel Messi, Xavi and Andres Iniesta are the the final three shortlisted for the award. If it wasn’t for the women’s award, the ceremony will probably be held at Nou Camp to save the traveling cost.

I’ve already covered why Messi is that good in the light of stats provided by Castrol Football Rankings but Xavi and Iniesta did pretty well in the last year and in the World Cup.

Xavi is known for his passing skills and his eye for gaps between defense whereas Iniesta is a master of close ball control and strolling through defenses.

Another interesting fact is that, back in Ocotber Messi has already tipped Xavi or Iniesta to win. With that said, (as a Barca fan) I am proud no matter what the result will be, the Ballon d’Or is coming to Nou Camp.

If it was up to you to decide to give the Ballon d’Or to, who would you choose. Remember, you’re not Sepp Blatter so don’t think like him. There’s no money involved.