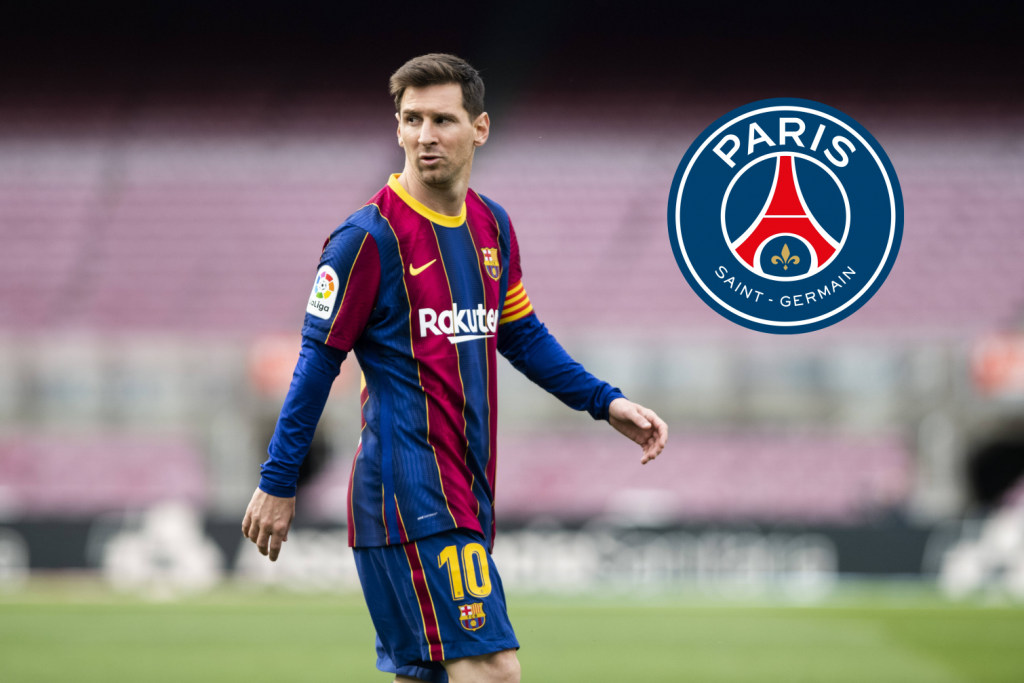 Did anyone see that coming even a week ago?

After a stunning set of events that saw Lionel Messi prevented from signing a contract extension at Barcelona that looked all but certain, the Argentine great has joined Paris Saint-Germain on a free transfer.

He joins an unbelievable two-year contract reportedly worth around €35 million per year including add-ons, with an option to extend for one more season.

As almost all of us know, the 34-year-old forward moved to Barcelona just as he entered his teenage years back in 2000, spending every one of his playing days at the club stage – whether in the youth levels or senior set-up – with the Blaugrana.

778 matches, 672 goals and 305 assists later, Messi has left Barcelona as both the player with more appearances than anyone else in the club’s history and all-time top-scorer among a couple of other things, which include the 35 titles he won in the 18 years he spent with the senior side.

For the first time in his professional career, Messi will find himself playing a club match in a shirt that does not have the famous Barcelona logo, so let us see how Paris-Saint Germain can integrate him into their star-studded squad.

Do we really need to say this? We’ll do it anyway – Messi is a left-footed attacker, primarily operating on the right-wing but also capable of playing behind a striker besides being the most famous proponent of the false nine. 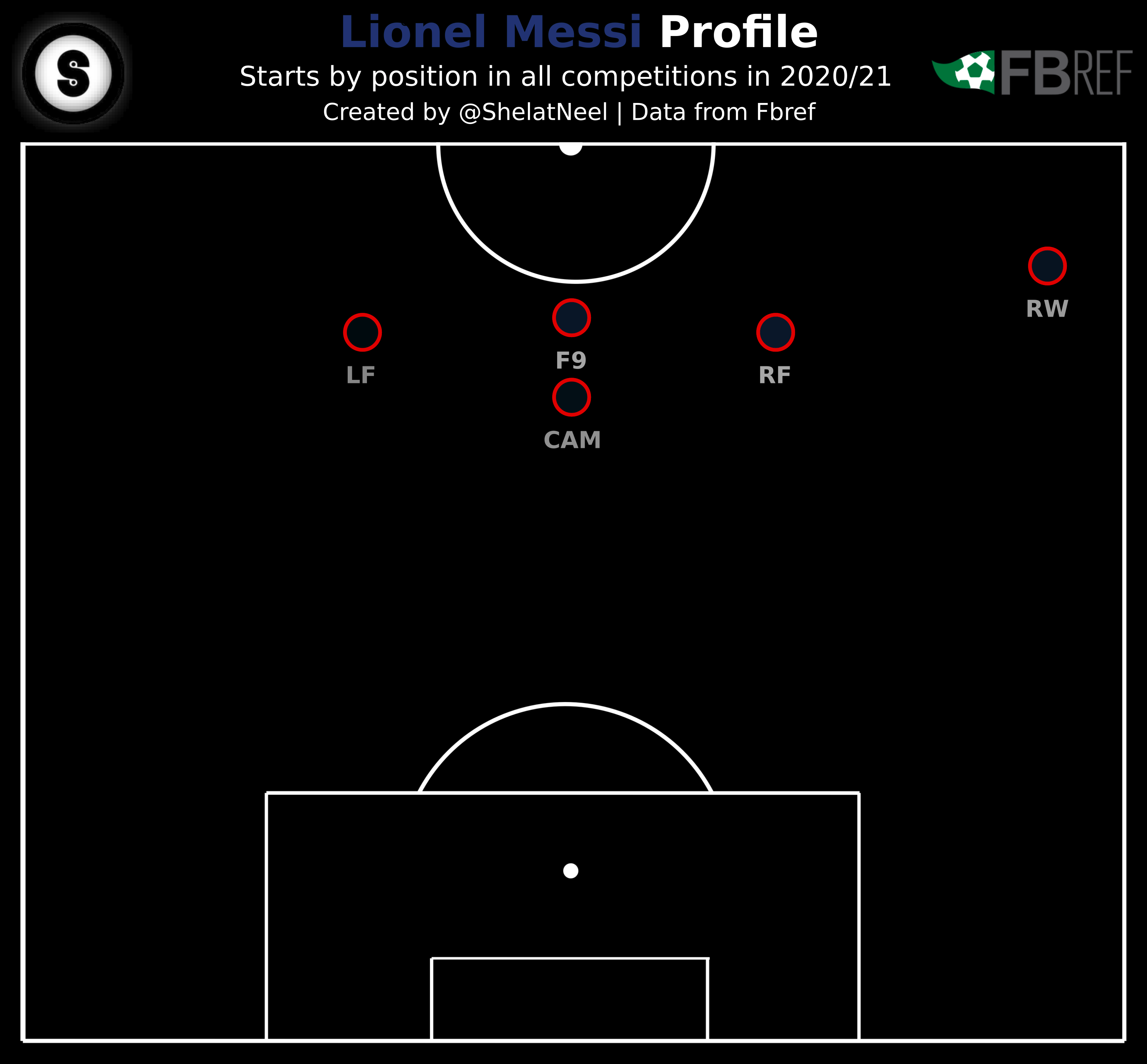 In case you didn’t know, Ronald Koeman tried many things at Barcelona last season, which is why Messi played in five distinct positions.

Tried as hard as you might, but the English language (or any other language for that matter) will fail you in an attempt to describe the pure genius of Lionel Andrés Messi.

Don’t write about him, don’t try to describe him, just watch him.

Where do we even start?

To put it simply: Messi is exceptional at everything you could possibly do with a football at your feet.

Fbref have a host of metrics to assess player performance, and Messi achieved the highest-possible 99th percentile in 35 of them among attacking midfielders and wingers in the last La Liga season, with the number going up to 53 as far as performance above the 95th percentile is concerned.

What does that mean? Well, Messi is the best of the best or among the very best at pretty much everything.

We could rattle off stat after stat which would make Messi look like the best player in world football right now, but only a madman would try to argue against the fact that he is very much up there, so let’s move on.

It is almost blasphemous to fault any part of Messi’s game with possession on his side, but he certainly has a weakness when his side do not have the ball.

With an average of just 8.66 pressures per 90 in last season’s La Liga, the Argentine international was way down in the second percentile among attacking midfielders and wingers, so his work rate in such scenarios is clearly not very high.

This will certainly be a concern for Paris-Saint Germain as neither Neymar nor Kylian Mbappé are renowned for their off-ball actions, so squeezing those three into one team and maintaining defensive solidity could prove difficult.

Either way, the club, their fans and neutrals will really be looking forward to seeing that trio in one line-up, so there must be a way for it to work.

Besides them, the likes of Ángel Di María, Mauro Icardi, Julian Draxler and Pablo Sarabia will also be in contention for the attacking spots, but it is hard to imagine them displacing any of the three main stars on pure merit.

If all of Messi, Mbappé and Neymar are to be used in one team, the 4-3-3 wouldn’t work in defence as the entire front line would be very easy to bypass for opponents.

Here is what that would look like on paper: 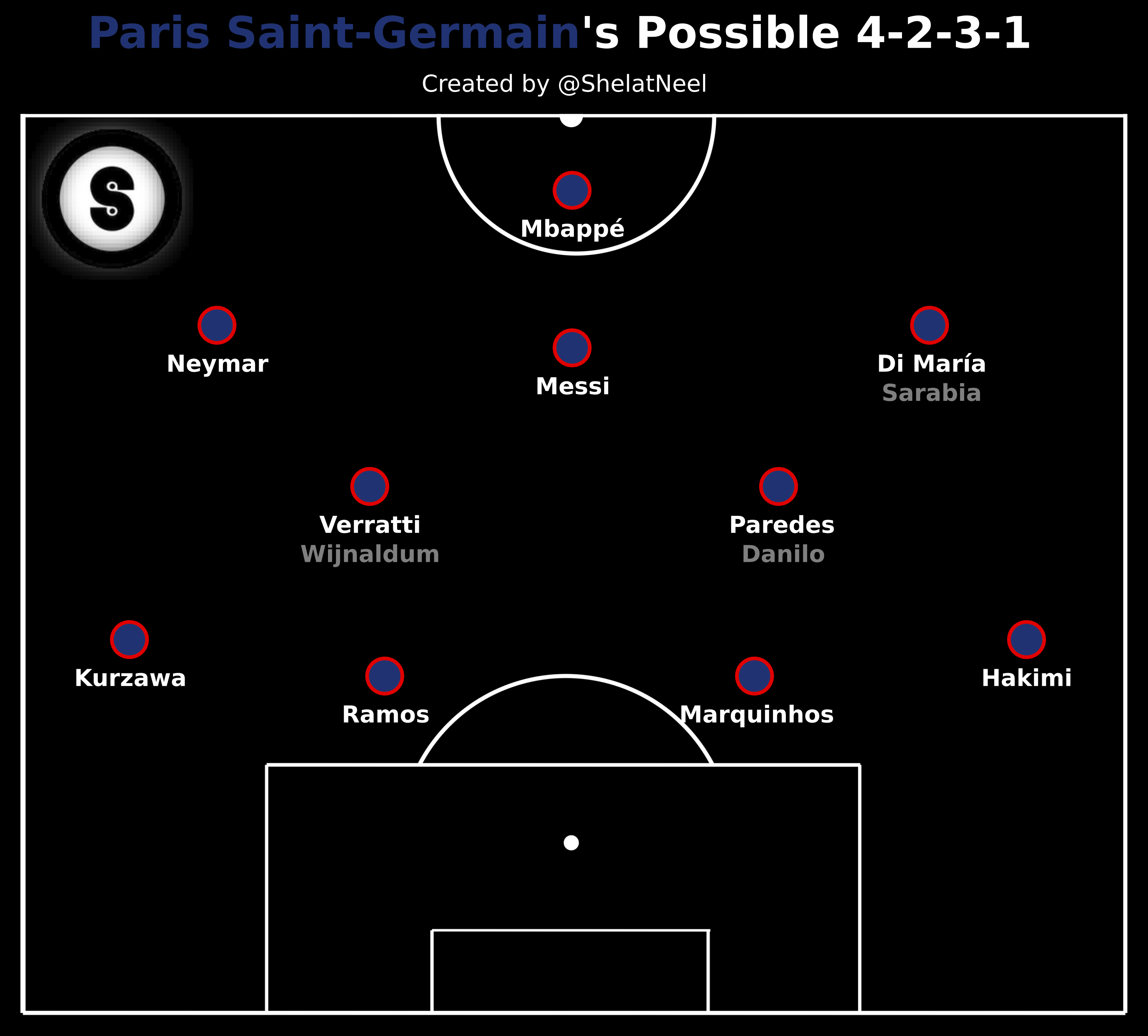 Defensively, this would require a fair bit of output from the two wide men as the shape transitions into a 4-4-2. 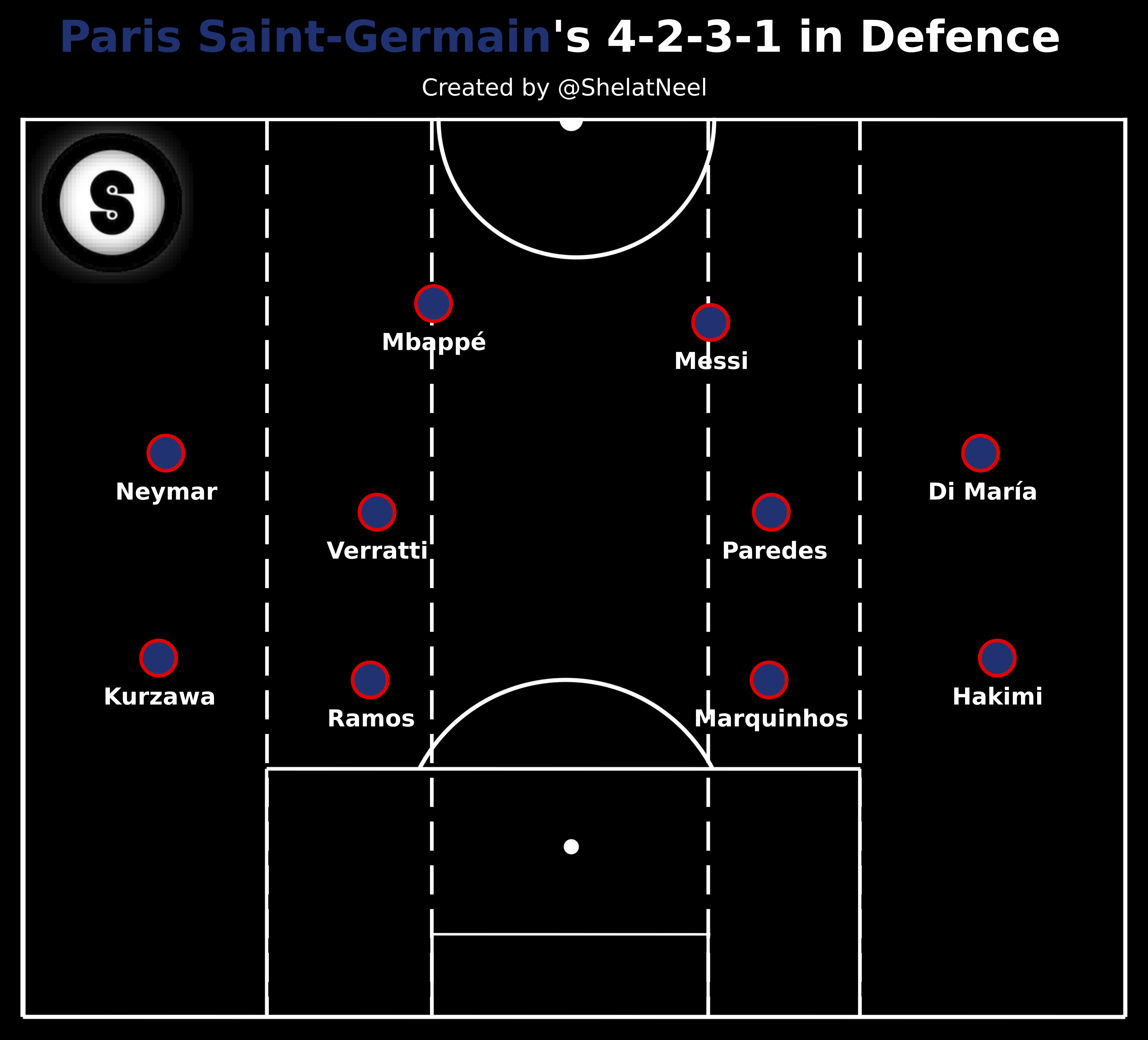 This would require a bit of work in the front line, where one would presumably look to Mbappé rather than Messi.

In possession, Pochettino likes his full-backs to get quite far forward while the ball is progressed centrally with one midfielder splitting the centre-backs and the attackers congest the middle of the pitch, so this is what the above line-up could look like in attack: 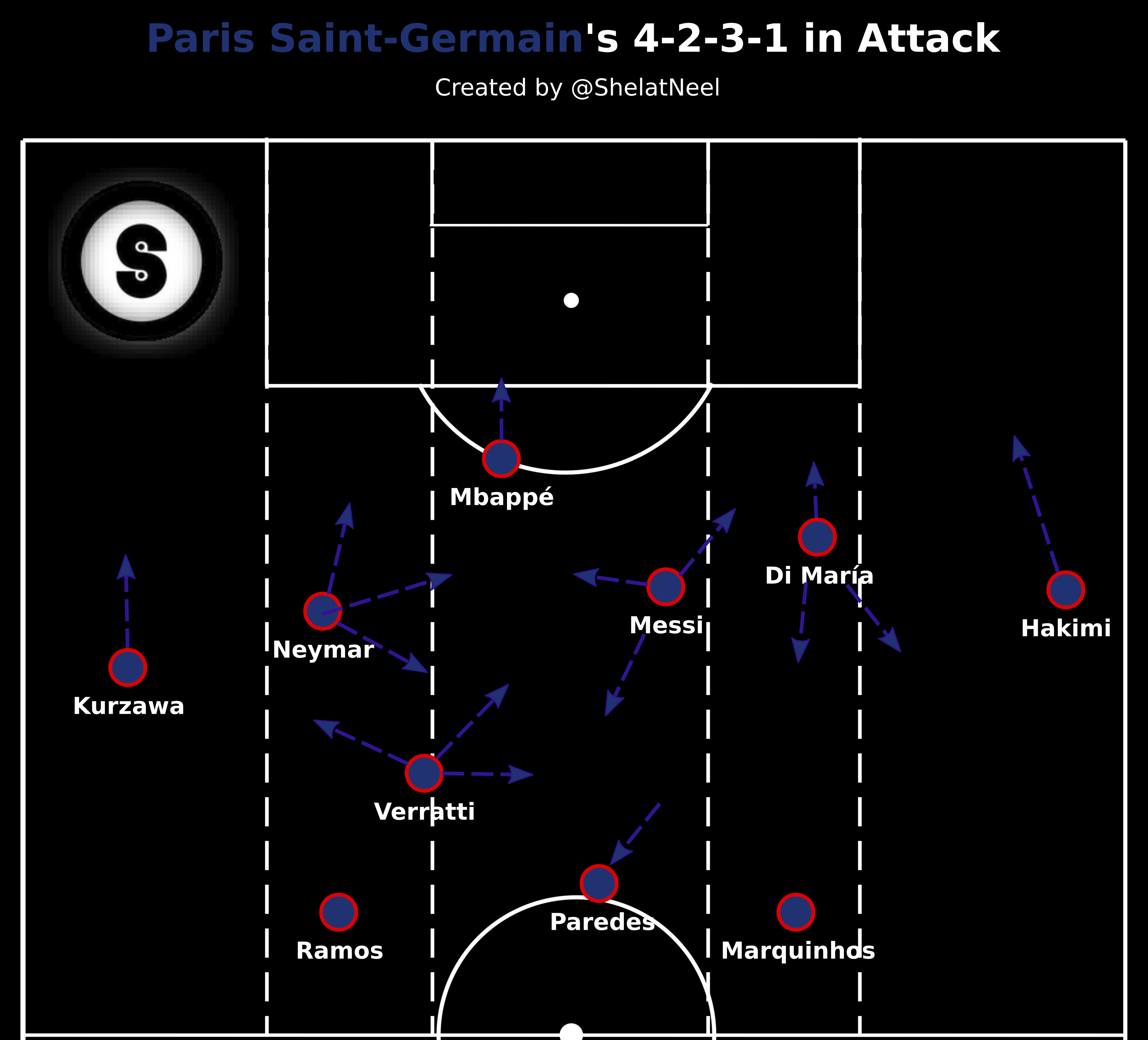 Besides the two midfielders, either Messi or Neymar would need to drop deep to assist with ball progression, while the other would position themselves in the space between the lines created by Mbappé stretching the opposition backline.

There would be a right-sided bias due to Hakimi, further bolstered by the right-winger dropping back on the flank to facilitate greater overlapping runs.

No matter how PSG play, one thing is certain: there will be some absolutely outstanding football on show.

Paris Saint-Germain are going to be some side this season.

After failing to win the Ligue 1 crown last time out, their revenge tour around France will leave the rest of the league miles behind them.

If all goes well, then they should have such a large domestic lead that they will be able to afford to focus almost solely on the Champions League in its latter stages as they chase the elusive trophy once again.

Barcelona, on the other hand, have their problems compounded if anything because not only will their on-pitch performances suffer massively with the loss of Messi, but they will inevitably lose a large chunk of their revenue too.

As we know all too well by now, finances are a bit of a problem in that region of Catalonia, so the second effect might even be the more damaging.

Adding Messi to their ranks obviously massively bolsters PSG’s chances with regard to a clean sweep of titles, as do the acquisitions of Sergio Ramos, Achraf Hakimi, Gianluigi Donnarumma and Georginio Wijnaldum.

All of this also leaves them with an incredible amount of squad depth – so much so that their second XI could very feasibly finish second in Ligue 1.

Rotation and rest, therefore, should not be an issue at all.