In-form Manchester United go to Villa Park on Saturday where they have enjoyed much success since the formation of the Premier League.

Aston Villa’s 1-0 loss at West Brom last weekend ended a five-match unbeaten run for Paul Lambert’s side which has propelled them to mid-table.

United have won their last six, including a 3-0 thrashing of Liverpool last weekend and winning away fixtures at both Arsenal and Southampton.

Right-back Alan Hutton is suspended after picking up his fifth yellow card of the season, whilst centre-back Philippe Sendero is ruled out through injury. Nathan Baker is also a doubt, giving Paul Lambert a few problems in defence.

Tom Cleverley is ineligible to face his parent club and Kieran Richardson is suspended against his former club following a rash tackle and straight red card at the Hawthorns. Ashley Westwood and Joe Cole are injured.

Libor Kozák is not yet back from injury whilst Christian Benteke has not scored in either of his last two.

The same back three of Phil Jones, Michael Carrick and Jonny Evans can be expected to take on Aston Villa with Marcos Rojo, Chris Smalling, Luke Shaw and Rafael all still sidelined.

James Wilson got the nod ahead of Radamel Falcao last weekend. All strikers are available to the Dutch manager. 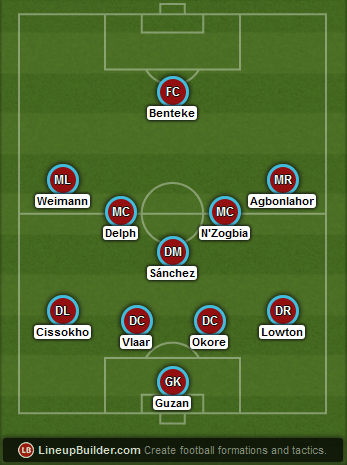 Ron Vlaar made a cameo appearance last week but should be good to go against Manchester United, at the expense of Ciaran Clark. A few absentees in midfield could give Charles N’Zogbia a rare start. Their pace on the wings and a goalscorer up front for United to contend with. 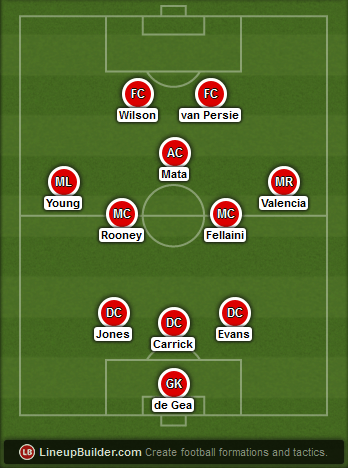 Louis van Gaal has lined up with three at the back against a number of lower half sides this season and may have no alternative this weekend with his large injury list. Wayne Rooney played more as a midfielder versus Liverpool and could be deployed there again, although Ander Herrera is another option. We’d expect Radamel Falcao to be used as a substitute rather than a starter.

Robin van Persie vs Ron Vlaar
Aston Villa’s captain has not had much action in recent weeks and can be expected to be really tested by his fellow countryman. Robin van Persie is in fine form of late and should see chances versus this Aston Villa defence. Antonio Valencia and Juan Mata were the key playmakers last weekend – Villa are without some regulars in the positions that are expected to mark them.

Juan Mata vs Fabian Delph
Juan Mata had an excellent showing in the number 10 role against Liverpool last weekend. Aston Villa’s Fabian Delph has been in the England team this season due to his work in midfield. Delph can break up the play of the opposition but also gives away a number of free kicks. Look for United’s playmaker to cause the Villa defence a world of problems. Any set pieces the home side give away around the edge of the box is also a big concern.

Ashley Young vs Matthew Lowton
Ashley Young returns to face his former team who are without regular right-back Ashley Young. Matthew Lowton has only made four Premier League appearances this season and may be a bit rusty. United’s left winger has really yet to deliver much this season but this match feels as good as any for him to make the step up.

Prediction: Aston Villa 0-2 Manchester United
Manchester United’s clean sheet relied on David de Gea as much as anything else last weekend. The defence should have an easier time this weekend with Aston Villa not scoring so many this season. We’re expected United to keep their winning streak going with the form their attack is in.