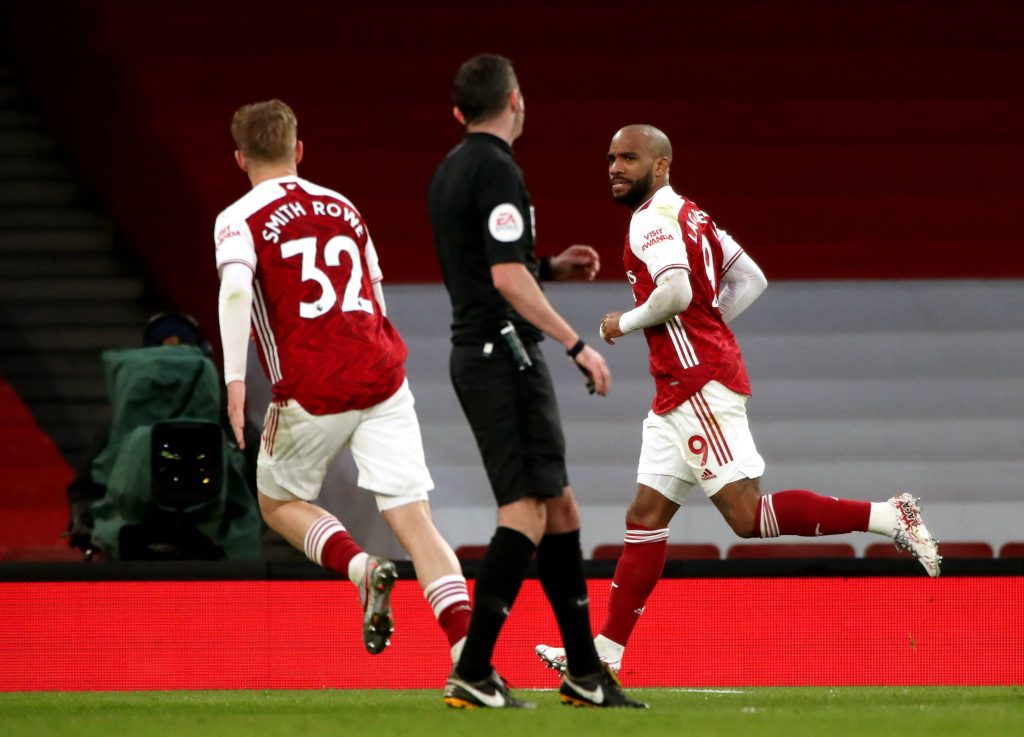 Arsenal came from behind to defeat Tottenham Hotspur in the North London derby on Sunday.

It was a quiet first 30 minutes, with Mikel Arteta’s side enjoying the bulk of the possession. Emile Smith Rowe hit a 25-yard cracker off the bar before teeing up Alexandre Lacazette, who sliced wide.

However, the visitors took the lead against the run of play with a moment of pure magic. Lucas Moura teed up substitute Erik Lamela, who pulled out a rabona into the far corner.

Arsenal continued to dominate the rest of the half, providing most of the threat down the left. They came close to equalising through full-back Cedric Soares, who crashed a shot off the post from Smith Rowe’s cutback.

Just before half-time, the hosts got their equaliser. Kieran Tierney beat Matt Doherty and played a low cross into Martin Odegaard, whose strike found the bottom corner via a deflection off Toby Alderweireld.

The Gunners were gifted with a glorious chance to take the lead after the break from the penalty spot. Lacazette sliced his left-footed strike but was caught by a sliding Davinson Sanchez on the follow-through.

Lacazette duly stepped up and rolled his penalty into the bottom corner.

Things went from bad to worse for Jose Mourinho’s men a few minutes later when goalscorer Lamela was shown a second yellow card. The Argentine caught Tierney with a stray arm, and referee Michael Oliver gave him his marching orders.

Harry Kane, who had a quiet game, twice came close to equalising in the final ten minutes. Firstly, he headed Lucas Moura’s free-kick into the far corner, only to have it chalked off for an offside.

Then, in the 90th minute, the England captain saw his free-kick slam against the post, with Sanchez’s rebound being blocked by Gabriel Magalhaes.

Arsenal held out for the three points, taking them level on points with Aston Villa. Meanwhile, Tottenham remain in seventh place, six points off the top four.

Man of the Match – Gabriel Magalhaes

Keeping Kane quiet is a task that many Arsenal centre-backs have struggled with in recent years, but Gabriel passed that test with flying colours.

The Brazilian hardly put a foot wrong all game, keeping an in-form Tottenham frontline at bay.

Not to mention, his crucial late block from Sanchez in the dying moments of the game secured the three points for the home side.

Jose Mourinho – what are you so afraid of?

It may have worked a few times this season, but Mourinho’s defensive style cost Spurs at the Emirates.

Even though they took the lead, it was a woeful first-half display from the Lilywhites, posing no threat whatsoever aside from the goal. This continued into the second half, epitomised by the decision to substitute Gareth Bale for Moussa Sissoko.

After Lacazette’s penalty, the balance of the game changed, and Tottenham were forced to go for it. And, despite going down to ten men, they looked far more dangerous going forward.

Yes, Son’s early injury was a huge blow, but there is still enough talent at Mourinho’s disposal to take a few more risks.

It was a big missed opportunity for Tottenham. Not only could they have done the double over their arch-rivals, but a win would have taken them into fifth in the table, three points off Chelsea with a game in hand.