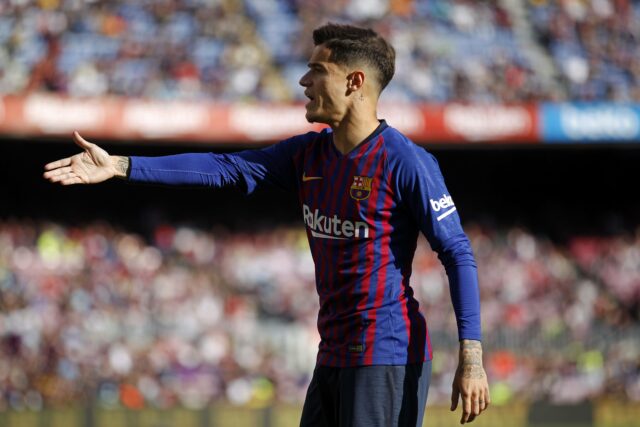 Barcelona midfielder Philippe Coutinho has been linked with a move away from the Spanish club for months now and it appears that the Brazilian international prefers a return to the Premier League with Arsenal.
According to a report from Daily Mail, the likes of Everton, Tottenham and Newcastle are keeping tabs on the former Liverpool midfielder’s situation as well but the 29-year-old prefer to move to the London club over their Premier League rivals.
Apparently, Arsenal are prepared to match his ambitions and wage demands. That said, it would be quite surprising if the player refuses to take a pay cut to return to the Premier League.
Arsenal could definitely use more quality and depth in the final third and the 29-year-old could be a useful addition in the short term. He could add creativity, flair and vision in the final third. Coutinho is excellent from the long-range and he could be an asset from set-pieces as well.
The 29-year-old played his best football in the Premier League with Liverpool and if he manages to regain his form and confidence, he could prove to be a key player for Mikel Arteta during the second half of the season.
Arsenal will be hoping to finish in the top four and qualify for the Champions League this season and they need to bring in the necessary attacking reinforcements in order to compete with their other top-four rivals.
Coutinho has fallen down the pecking order at the Spanish club and he needs to play regular first-team football in order to regain his form and confidence.
Furthermore, with the World Cup coming up, the Brazilian cannot afford to sit on the bench at Barcelona every week.
A move to Arsenal could help resurrect his career and it will be interesting to see whether the two parties can strike an agreement in the coming weeks.
Join 888sport and enter bonus code BOX45 to get £45 in Free Bets when you bet £10 on any football match.
Tags
Arsenal Barcelona English Premier League La Liga Transfer News & Rumours