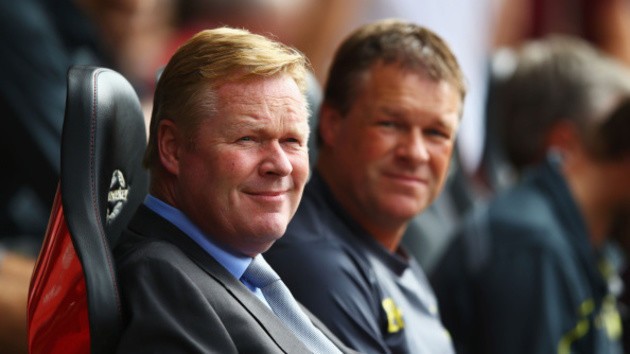 Barcelona’s 4–0 Champions League capitulation to Paris Saint-Germain earlier this week has pushed the club to a crisis. While no one foresaw such a damaging result this early in the competition, what has followed thereafter is no surprise.

Scapegoating the manager for a team’s bad results on the pitch is among the doctrines of the modern game, one from which the Blaugrana manager cannot escape. The local media in Barcelona was fairly ruthless in its appraisal of Barça’s performance in Paris, and calls for Luis Enrique’s head now grow louder with each passing day.

However, for a club as big as Barça, there are options aplenty. Should Enrique be shown the door at the end of this season, there will be a long queue of potential replacements lined up. Here we assess where Barça should search for Enrique’s successor in the event of the Asturian’s departure.

1. Everton: Ronald Koeman is a big part of Barça’s history, and any return to the club would represent the pinnacle of his managerial career, much like his playing days. Koeman has been managing football clubs since 2000 and has also worked as Louis van Gaal’s assistant at Barça in the past.

The 53-year-old is a well-traveled manager who has had stints in Portugal, Spain and England apart from his native Netherlands. His most recent moves in the Premier League suggest the Dutchman is making his way to the top, having entered English football with Southampton before joining Everton last summer. A move to Barça might be his biggest step-up yet, but whether the Spanish champions fancy him is another matter.

2. Tottenham Hotspur: Like Barça’s best player Lionel Messi, Mauricio Pochettino is an Argentine and started his career at Newell’s Old Boys, and that is enough for the rumour mill to make something out of nothing. Pochettino emerged as a fine, young manager after making his move to the Premier League with Southampton in 2013. He is now among the league’s elite tacticians and is known for his attacking brand of football at Tottenham.

Pochettino was the manager of Espanyol, Barça’s local Catalan rivals, for three years between 2009 and 2012, something that makes him an unlikely candidate for the Camp Nou job. However, with his record of nurturing young players and the supposed mess Barça’s La Masia is in, Pochettino could be an attractive proposition for the Blaugrana.

3. Arsenal: Arsène Wenger’s contract at Arsenal ends after this season, and the Frenchman could emerge as a surprise candidate to replace Enrique. Wenger’s style of football would resonate well at Camp Nou, given his Arsenal side have earned the moniker of mini-Barça for their one-touch, dynamic attacking play.

Having failed to win the Champions League in over 20 years at Arsenal, Wenger’s chances of lifting the hallowed ‘big ears’ will receive a boost in Barcelona. However, the Frenchman is now 67, hence he will add little value to the long-term prospects of Barça. Wenger was regarded as one of the game’s best managers ten years ago; it is clear that he doesn’t retain that reputation now, hence his will be a left-field appointment should it happen.

4. Borussia Dortmund: Thomas Tuchel is one of the most promising managers in world football, but the Swabian has been struggling of late amid the high-pressure environment of BVB. The 43-year-old has less than a decade’s experience at the highest level but is a disciple of Pep Guardiola’s positional game, which has given way to vertical football at Barça in recent years.

Tuchel’s appointment would see the Guardiola-era positional game return at Barça, but it looks unlikely that the well-regarded German will make such a big jump this early in his career. A more gradual progression up the ladder with a spell at Arsenal looks more likely. That, though, doesn’t stop him from being the second favourite to replace Enrique.

5. Sevilla: Ahead of Tuchel as the favourite to replace Enrique is Jorge Sampaoli of Sevilla. The all-action Argentinean has impressed in his first season managing a European club and taken Sevilla to La Liga heights never before scaled by the Andalusian club. Among his impressive career achievements is leading the Chile national team to the 2015 Copa América win.

Sampaoli has made Sevilla a more dynamic and free-flowing unit this season, but doubts remain over whether he can take that into the heated environment of Barça. A believer of Marcelo Bielsa’s ideals like Guardiola, Sampaoli’s appointment will immediately inject positivity at Barça, something which cannot be said of the other candidates.

6. The Basque clubs: Both Ernesto Valverde and Eusebio Sacristán played for Barça in the past, hence they stand to know the demands of the club more than most. Valverde is well into his fourth year at Athletic Bilbao, while Eusebio’s first full season at Real Sociedad has seen the Txuriurdin fly high.

Both Valverde and Eusebio represent far lesser risks than any of the aforementioned candidates owing to them being Spanish. Furthermore, they are currently plying their trade in La Liga. Eusebio has managed Barça’s B team in the past, but Valverde is far more experienced. Either of those two managers on the two sides of the Basque derby divide will be a safer option for Barça post-Enrique.

With players such as Messi and Neymar in their prime, managing Barça is an alluring prospect. However, as Enrique is finding out, the heat in the event of any disastrous result is also otherworldly, hence only those with the thickest of skins can survive such a demanding job. Whether Enrique clings to his life amid the latest storm remains to be seen, but should he leave, it won’t be an easy call for the club to choose his successor.