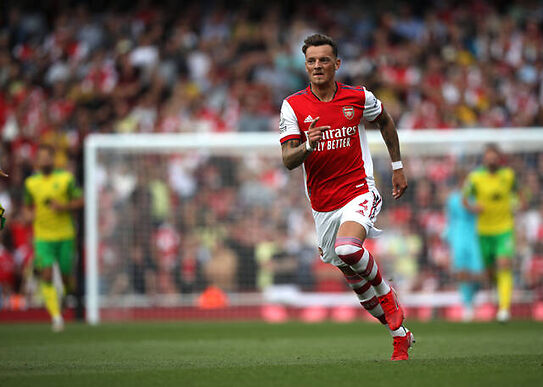 Arsenal fans have taken to Twitter to express their reactions to Ben White’s performance following their victory over Norwich City on Saturday.

After a horror start to the season, the Gunners finally got their season underway with a 1-0 win against the newly promoted Norwich at the Emirates.

Pierre-Emerick Aubameyang’s goal was the difference between the two sides, and it ensured the Gunners move out of the drop zone.

Norwich are yet to pick up a point after four games.

Mikel Arteta made a few changes to the squad, with Aaron Ramsdale making his debut. The Spaniard also went with a three-man defence of Tomiyasu, Ben White, and Gabriel, while Kieran Tierney and Ainsley Maitland-Niles operated as wing-backs.

Tomisayu was brilliant before he was taken off, but the pair of White and Gabriel impressed heavily. Many Arsenal fans are heavily impressed with the performance of White. Here are some of the selected tweets:

Ben White and Gabriel Magalhães keeping a clean sheet against one of Europe’s best attacks, in only their first game together. Incredible defenders.

We haven’t had a lot to be happy about this season, so here are some things that made me happy today:

Ben White's passing is exceptional. Won a lot in the air today too. Glad he had a strong performance to quiet the criticism after Brentford.

Gabriel and Ben White with an outstanding game. We could have scored 4-5 goals but were not good enough in front of the goal. Hoping we are more efficient in the next game. Up the Arsenal.

Loving the connection between Ben white and Tomiyasu so far! #ARSNOR

White joined the Gunners in the summer for a fee of £50 million from Brighton. He was very poor against Brentford and Chelsea, but it seems, he is gradually settling down at his new club.

The victory may have come against Norwich who were expected to struggle, nevertheless, it was a solid performance from the Gunners.

The 23-year-old has shown his class for Brighton, and Arsenal fans have high hopes for him. Arsenal will face Burnley away in their next Premier League game at Turf Moor.