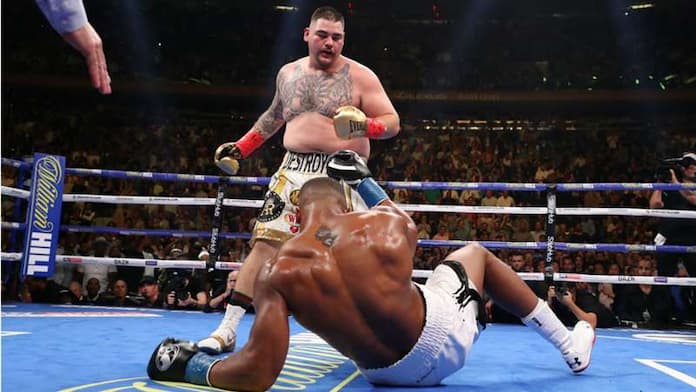 ANDY RUIZ JR has stated he wants Anthony Joshua next, if he wins against Luis Ortiz on his heavyweight return this Saturday night in Los Angeles. Ruiz Jr and Joshua have fought twice before, with each man winning one a piece. A trilogy bout between the pair would finally settle the score and end the chapter on each other.

Ruiz is making his return to the ring after 16 months out, and he faces heavyweight dangerman and veteran, Luis ‘King Kong’ Ortiz. Provided ‘The Destroyer’ wins on Saturday night, he wants that third fight with Joshua to happen in 2023.

Andy Ruiz Jr has confirmed that he wishes to take on Anthony Joshua in a trilogy bout after his fight this weekend with Luis Ortiz. The former world heavyweight champion has a tough task at hand this weekend, but provided he comes through the fight unscathed, he wants the ‘AJ’ third fight to happen next.

Anthony Joshua and Andy Ruiz first fought in June 2019, in a fight that Ruiz stepped in for on late notice, but shocked the world come fight night. ‘The Destroyer’ got up off the canvas and knocked the previously undefeated champion out in the seventh round, after having him on the deck on four occasions.

The pair then rematched on December 7th 2019 in Diriyah, Saudi Arabia, in a fight that Joshua comprehensively out-boxed Ruiz Jr, winning back this three world heavyweight titles in the process.

Since then, Ruiz has only had the one fight, which he won against Chris Arreola in May 2021. On the other hand, Joshua has fought three times. The Brit beat Kubrat Pulev in a heavyweight title defence, before fighting Oleksandr Usyk twice, most recently last month, losing on both occasions on the judges scorecards.

A third fight between Joshua and Ruiz can definitely sell and certainly has a large appeal, provided the 32-year-old American wins this weekend in his tough challenge versus heavyweight veteran, Luis ‘King Kong’ Ortiz.

It is difficult to answer this question without knowing the outcome of Ruiz Jr vs Ortiz this Saturday night. However, if we are to assume that the first Mexican born heavyweight champion of the world does get his hand raised, then the Joshua trilogy is certainly a fight that could happen next.

‘The Destroyer’ had this to say on a potential trilogy with Joshua, and fights down the line with the likes of Deontay Wilder, Oleksandr Usyk and Tyson Fury:

“Of course I want the Joshua trilogy. There’s still blood there after I won the first time, and he won the second fight. He [AJ] beat me because of myself. I didn’t do the right things for that fight,” said Ruiz Jr when asked who he wants to fight next.

“Right now, I feel I’m in the right state of mind. Either one would be good,” said Ruiz about him being interested in fighting Joshua again or Deontay Wilder in the future.

Who knows what will happen next and how the heavyweight landscape will play out in the next year to 18 months. One thing is for sure, there are some amazing fights to be made between some great heavyweights. Current champions, former champions, upcoming challengers and some surprise packages – hopefully they all fight each other.

Haven’t claimed the Ruiz vs Ortiz betting offer yet? Don’t worry, take a look at the best betting sites and claim the best bookmaker free bets. Be sure to also check out the best offshore betting sites.