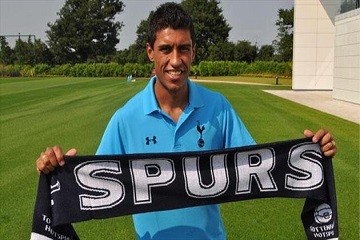 Life as a Tottenham fan can be difficult, with the end of a season often met with an overriding sense of heartache. This is especially the case for the new generation of Spurs fans, who have witnessed talented squads come agonizingly close to achieving their ultimate ambition of Champions League football, only to fall short at the last hurdle.

Indeed, since Joe Lewis and Daniel Levy purchased the club in 2001 through ENIC International, the Lilywhites have only featured in Europe’s premier competition once, yet have managed to finish within one place of Champions League qualification on five separate occasions.

Last season, under the stewardship of André Villas-Boas, Tottenham managed to record a club record 72 points only to be outdone by rivals Arsenal on the final day of the season.

The agony of falling short in such a manner may conceivably have been enough to ruin the positive momentum that AVB had been building at White Hart Lane on its own.

Therefore, when clubs such as PSG and Real Madrid began to look at the possibility of bringing not only Spurs’ best player to their club but also Tottenham’s young and exciting manager, even the most optimistic fan could have been forgiven for fearing the worst.

However, instead of grasping the opportunity to make a fortune from the sales of their most valuable assets, Tottenham’s ownership have seemingly decided to use the off-season as a chance to make a bold statement of intent to its rivals, convinced that the squad is on the verge of greatness.

Determined to prove himself, AVB has also turned down the appealing yet potentially career threatening advances of Europe’s bigger clubs, reassured that star player Gareth Bale is not for sale at any price.

As a result, Tottenham Hotspur are in the unusual position of being one of the few ‘bigger’ clubs in England who have stability, both in their playing staff and management.

Whilst Manchester United, Manchester City and Chelsea all welcome new managers – each with their own set of methods and ideas – Tottenham have the chance to grow organically as a group, with everyone from the owners to the players all pulling in a similar direction.

Similarly, whilst other contenders for the coveted Champions League spots (Arsenal and Liverpool) are being pressured into taking gambles on new additions, AVB and Spurs are fully aware of how they would like the squad to look come the beginning of the 2013/2014 Premier League season.

The arrival of recent Brazilian Confederations Cup hero Paulinho for a fee believed to be in the region of £17 million only serves to emphasize Tottenham’s ambition.

After being voted as the third best player at the tournament – behind only Andres Iniesta and Neymar – such a high profile figure would surely have caught the attention of every one of Tottenham’s rivals, with Manchester United, Chelsea and Arsenal in particular need of a high calibre centre midfielder.

Even Manchester City will be hurt by Tottenham’s latest acquisition, after recently spending twice as much on Fernandinho who is not only over three years older, but is also below Paulinho in the national pecking order.

With the Brazilian’s arrival, attention has quickly shifted towards bringing a proven goal scorer to White Hart Lane. In a long line of targets – including David Villa, Roberto Soldado, Alvaro Negredo, Christian Benteke and Leandro Damião – it is difficult to imagine any failing to find the net regularly for the North London club.

Left back is also another area that could potentially be improved, but with the general lack of quality available in the transfer market and Danny Rose back at Enfield for pre-season, AVB may be tempted to spend the majority of his transfer budget on bringing in the very best striker available.

With Villas-Boas and Gareth Bale set to stay at White Hart Lane, as well as the return from injury for two of the squads most important members (Younes Kaboul and Sandro), Tottenham are already better placed to achieve its target of at least fourth place.

However, with the promised arrival of two or three proven players and the summer of upheaval and uncertainty facing their major rivals, Tottenham fans may be set to witness something truly special, with ecstasy replacing agony as the overriding emotion felt next summer.