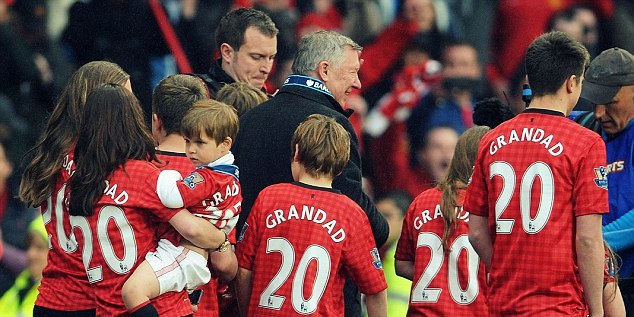 Manchester United manager Sir Alex Ferguson takes charge of his last ever game at the club against West Brom next Sunday, after over 26 years at Old Trafford.

Here is Alex Ferguson’s all-time greatest XI in his time at Old Trafford:

Signed in 1991, Peter Schmeichel became one of the greatest ‘keepers of all time by the end of his illustrious career. His mere presence was enough to win psychological battles with opposing strikers, and he was a major reason for United’s dominance in the early years of the Premier League.

His final season at Old Trafford saw him win the 1999 Champions League, and his £500,000 fee back in ’91 certainly wasn’t a bad bit of business by Alex Ferguson.

Gary Neville bleeds United, having been a fan of the club as far back as he can remember.

There weren’t many more consistent full-backs in Europe during the late 90s and early 00s, and his hunger to win and refusal to accept defeat epitomised United’s success in his time as a player. His partnership down the right hand side with David Beckham was one of the most efficient, effective in United’s history.

Nemanja Vidic has been a true leader over the last five or six years, and if there was one defender on the planet you would want in a big game the Serb would be your man.

Incredible in the air and underrated on the ball, the 31-year-old has formed one of United’s greatest defensive partnerships with Ferdinand, winning countless Premier League titles and the Champions League in 2008.

Rio Ferdinand is unfortunate to miss out on the team given his longevity, but Stam was an absolute colossus at Old Trafford in the three years he was at the club.

Strong, commanding but also very quick, the Dutchman was the world’s best defender for a period in the late 90s, and he was key to United’s Champions League success in ’99. Although he left the club after a very public falling out with Alex Ferguson he is still remembered as a truly great defender for the club.

Patrice Evra comes close, but Irwin gets the nod because of remarkable consistency. The Irishman was a very likeable player who never made the headlines off the pitch, and he was a constant fixture in the side that began to dominate English football in the early to mid 90s.

He spent 12 years at Old Trafford, and you could probably count on one hand the number of bad games he had.

Cristiano Ronaldo was quite simply a phenomenon at United, and arguably the most naturally gifted player the club has ever had. Signed in 2003 as a precocious 18-year-old, his first few years saw him show great skill and entertainment but no real substance. Then, between 2006 and 2009 his game went up a huge notch, and he was unstoppable.

He almost won the 2006/07 Premier League title by himself, and he scored in the 2008 Champions League Final victory against Chelsea. He is a freak of nature, with incredible pace and talent combined with a commanding physical frame and an unrivalled aerial threat. Will Real Madrid let him return in the summer?

One of the most intimidating players in United’s history, and also one of the most influential. Alex Ferguson often calls Roy Keane the best player he has worked with, and their relationship helped guide the club to the summit of European football.

He remained with Manchester United for over a decade, and his drive in midfield, never-say-die attitude and leadership make him a true Old Trafford legend. A hugely underrated player on the ball too.

One of greatest midfielders of his generation, and one of the most naturally gifted players England have ever produced, Paul Scholes has been a remarkable player for United. Shy and understated off the pitch, he has been a joy to watch on it.

Wonderful vision, superb long-range shooting and an ability to arrive late in the box and score goals in his younger years, the 38-year-old is the complete midfielder. Admittedly his tackling isn’t the best but that steely edge to his game shows his desire to be a winner. Has won an astonishing 11 Premier League titles.

The fact that he is the most decorated British footballer of all time speaks for itself, and Giggs is perhaps the symbol of United on the pitch over the last 20 years. He started off as a magnificent young winger, and has adapted his game brilliantly as age has caught up with him.

Rarely injured and incredibly consistent, the Welshman has won 13 Premier League’s, four FA Cups and two Champions League titles in an unforgettable career in which he has made over 1000 appearances for club and country.

Cantona was, quite simply, the catalyst in United’s domination of the Premier League era. When he signed from Leeds United he brought with him great charisma, influence and a touch of genius.

Youngsters like Scholes, Neville and David Beckham looked up to him for inspiration, and the Frenchman invariably delivered. The FA Cup final winner against Liverpool; the crucial goal at Newcastle United in 95/96; the iconic solo effort and celebration against Sunderland; these are just a few memorable moments in a wonderful Old Trafford career.

He retired far too young at 31 but is still rightfully seen a true Manchester United great.

Ruud van Nistelrooy is possibly the most deadly finisher Old Trafford has seen. Funnily enough, the Dutchman’s peak came at a time when United were not at their most prolific, between 2002 and 2006. They won only one Premier League title in five years, but Nistelrooy was unstoppable.

He guaranteed 30 goals a season and was a far better all-round striker than some gave him credit for. Many saw him just as a poacher in front of goal, but his movement, strength and intelligence were very underrated.

Another who eventually fell out with Alex Ferguson, 150 goals in 219 appearance shows just how good he Van Nistelrooy was in his five years at the club.

Who would make your all-time Alex Ferguson XI? Let us know with a comment below.